If only the walls could talk, Kilkea Castle, one Ireland’s longest continually inhabited medieval castles in County Kildare, could tell tales of witchcraft, a monkey saving a baby from a fire as well as the ghost of the Wizard Earl who is reputed to return on the 7th day of the 7th month of the 7th year on his horse with silver hoofs.  Now, no one knows which is the 7th year!  Who is up for staying the night of the 7th day, of the 7th month for the next 7 years to witness it? We may pass on it! But, if he was to return he would be amazed at the change.

The 12th Century Irish castle does not look like it was when he was mixing his potions.  The new owner American Jay Cashman, has undertaken a major 5-year renovation of the Castle costing a cool $35 million.

We met with enchanting Siofra who guided us through the Castle, explaining the history and showing us the available accommodation. Siofra is very knowledgeable on the Castle and the surrounding area, you can tell that castles and their history are her passion. She has one of the best jobs, working for one of the best castle hotels in Ireland.

For the latest deals and bookings:

There are over 30,000 Irish castles and castle ruins throughout Ireland.  During our 3-week road trip, we visited Barberstown Castle, Bunratty Castle, Blarney Castle, Kilkenny Castle and Dublin Castle and we have to say that all are different, full of intrigue and history and all fascinating to visit.  Ireland had no royal family but instead, the castles were built by the powerful and rich Clan Chieftains and interestingly the Anglo-Norman settlers who had their minds set on conquering Ireland. 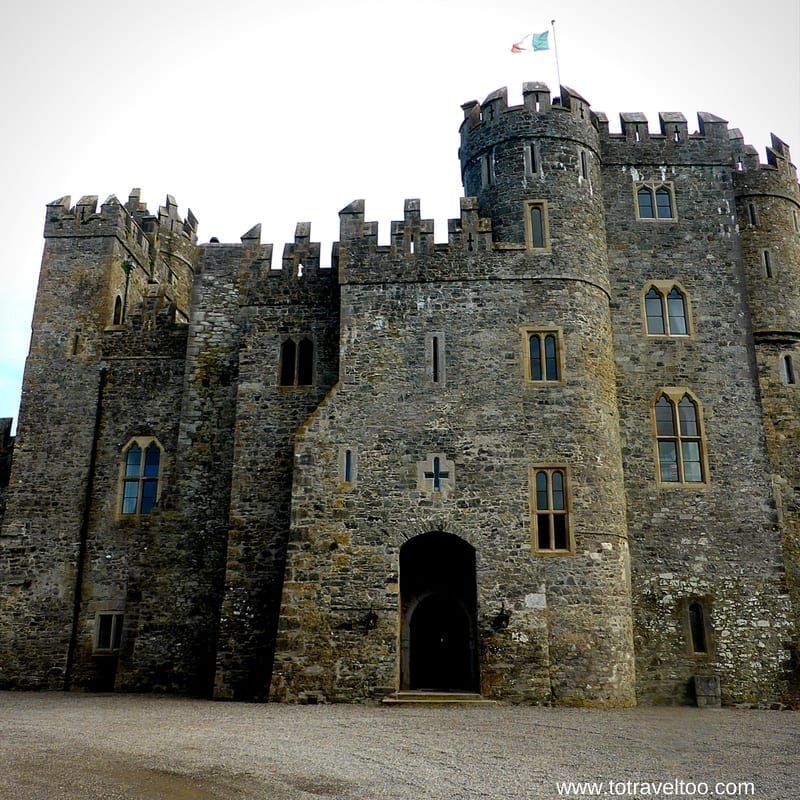 Kilkea Castle was built in 1180, by Hugh de Lacy, the Earl of Ulster and who was also the Chief Governor of Ireland, for Sir Walter de Riddlesford. The Noble Earl Strongbow who owned the land gave it to Riddlesford.  The original structures would have been a stone keep and gatehouse.  On Riddlesford’s death in 1244 his two daughters Emelina and Ela were left the Castle.  Emelina married and had a daughter also named Emelina who married Maurice Fitzgerald, the 3rd Baron of Offaly.  The Castle stayed in the Fitzgerald Family for the next 700 years, some of them are buried in the small graveyard at the rear of the castle.

Now, the last 700 years haven’t gone too smoothly for the Fitzgeralds.  Thomas Fitzgerald who was born in England in 1513 was the 10th Earl of Kildare. He was more commonly known as Silken Thomas as he always dressed in fancy clothes made from silk. In June 1534 a rumour was passed that Thomas’s Father Gerald the 9th Earl of Kildare, who had been called to London to answer the charges of disloyalty to Henry VIII, had been beheaded.  Silken Thomas got together a band of his most loyal followers to uprise against the British.  Silken marched to Dublin Castle where the Archbishop of Dublin was holding a meeting, the Archbishop got word and escaped by boat. The Fitzgerald’s were hated by the English as they had power in Ireland and the Archbishop had it in for the Fitzgeralds. Silken’s men caught up with him and brought him to Clontarf Castle in Dublin.  In the meantime, Silken had received word that his Father had not been beheaded and issued an order ‘do not kill’.  The message did not get through in time and the Archbishop was killed by one of his men.

On the 3rd January 1537, Silken and 5 of his uncles were beheaded at Tyburn.

Silken’s half-brother Gerald at the age of 12 was sent to the continent to be educated and fell under the influence of the renaissance period.  He studied medicine, astrology and metallurgy and discovered alchemy.  Upon the death of Henry VIII, land was returned to the Fitzgeralds so Gerald returned from the continent and took up residence in Kilkea Castle. 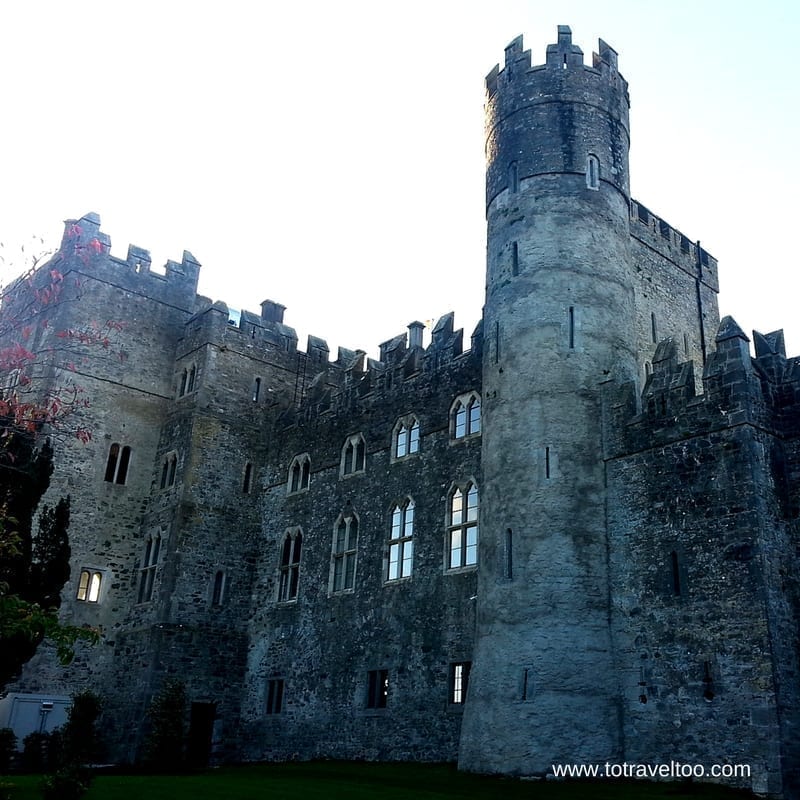 Gerald spent the next few years practising his newfound arts and dabbled in the Occult as well.  He married his wife Mabel Browne, daughter of Sir Anthony Browne, Master of the Horse in the Court of Edward VI.  The local villagers had started to become suspicious of the Wizard Earl with his mad ideas and witchcraft tendencies, even his wife started to pester him about his work with the ‘dark arts’. He set up 3 tests for Mabel, to see if her resolve was strong enough to resist fear.

The first test – The Earl raised the level of the River Greese to flood the banqueting hall of the Castle where his wife was seated, the water level reached to the height of her chin – she showed no fear.

The 2nd test – The Earl bought one of his wife’s friends back to life when they were in the dining room of the castle, he approached and shook her hand and disappeared into a wall – she showed no fear.

The 3rd and last test – The Earl told his wife to close her eyes, he disappeared and turned up as a bird on her shoulder.  A large cat seeing the bird jumped up and attacked, Mabel screamed, showing fear and the Earl was never to be seen again.

7th day, of the 7th month and of the 7th year – the Earl returns to find the love of his life.

A full history of the Castle written by Lord Walter Fitzgerald can be read at this link from the Kildare Archaeology Society. 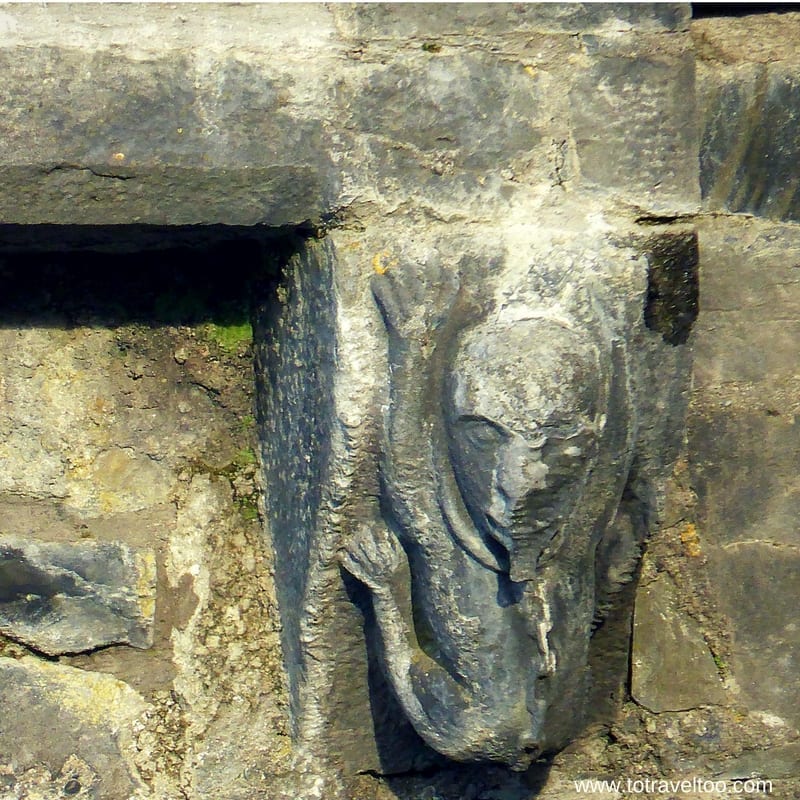 Monkey carved into the Haunted part of the Castle

Kilkea Castle is full of legends and none more so than the Monkey legend and why it is the logo for the castle.  The Fitzgerald Family had a ‘cheeky’ monkey who used to escape from them and hide in the trees around the grounds, to prevent this happening the Fitzgeralds had to resort to tying him up in chains.

At a family gathering, a fire broke out, the baby John the 1st Earl of Kildare was asleep in his room, the monkey was also tied up in there.  The family were frantic as they could not reach John, suddenly the monkey appeared with John and was saved.  The Earl in appreciation adopted the monkey logo for the family’s crest.

In the haunted section of the castle where the chimney is located, if you look to the right you will see a carving of the monkey.  There has been no fire since in the Castle. 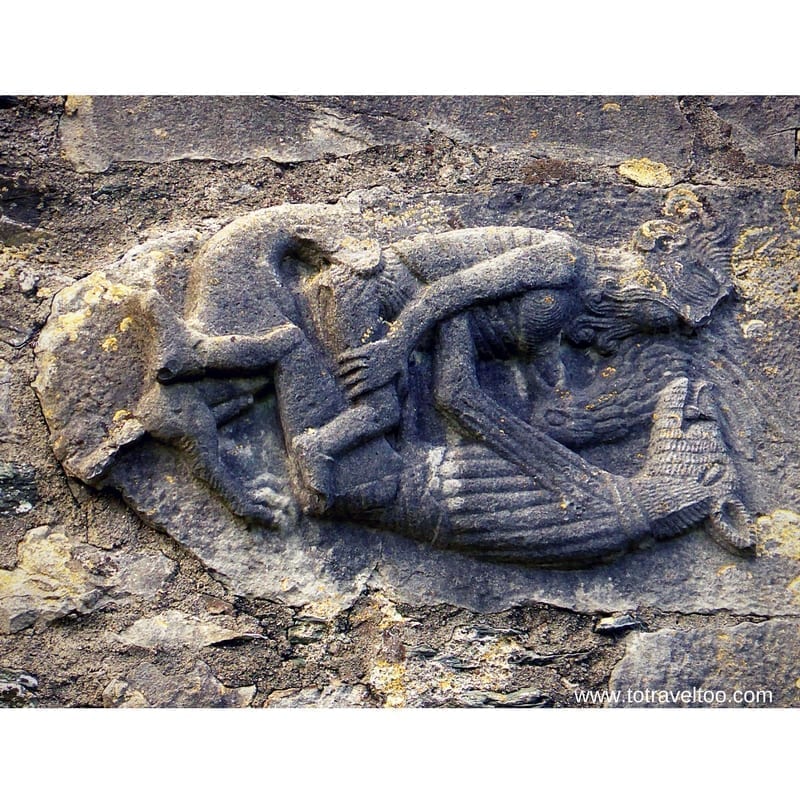 Once again in the haunted section of the Castle as you enter from the Golf Club look up towards the arch and you will see the Evil Eye Stone.  The grotesque image is to warn off evil spirits and dates back to either the 13th or 14th century. Many of the Irish medieval castles had the evil eye stone incorporated into their structures e.g. Malahide Castle.

Under a tree at the back of the Castle, you can find the Fitzgerald’s family pet cemetery. 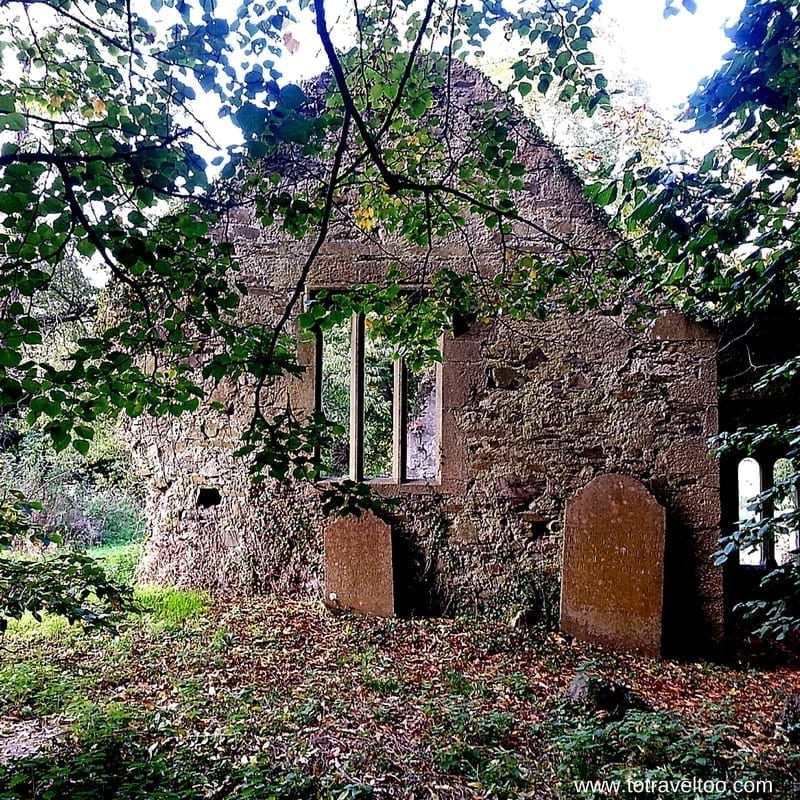 Ruins of the Medieval Church 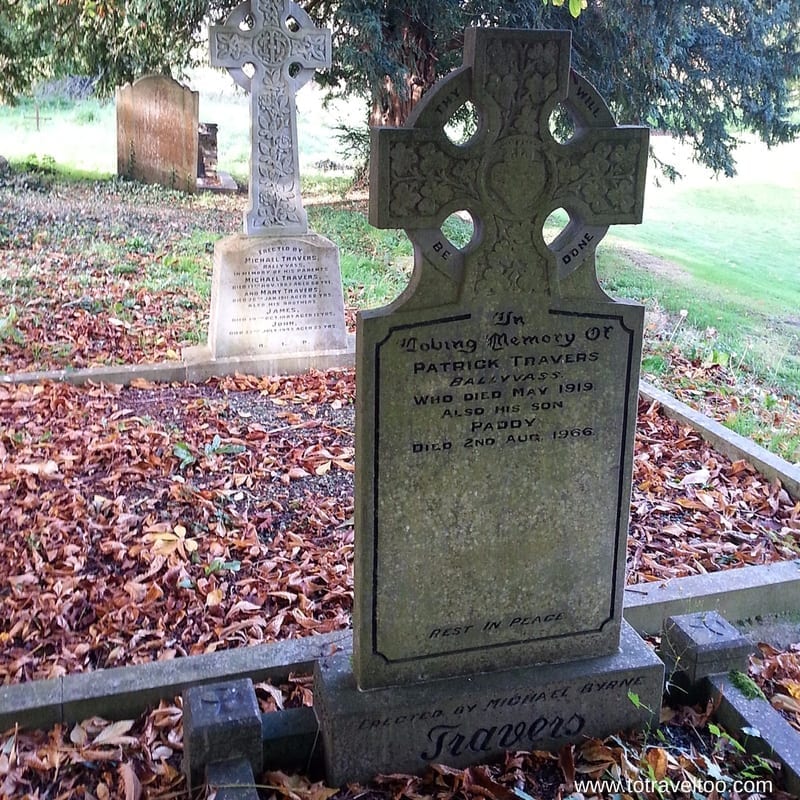 The Fitzgerald Family Plot is located within the ruins of the medieval church.

Our Experience at Kilkea Castle

Our arrival at the Gates of Kilkea Castle made us stop, grab our phone and video the driveway that leads up to what one can only say is ‘one of the most impressive castle parks in Ireland’. Check out our video. 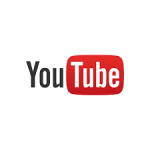 We checked into the Golf Club with Soifra who led us down to one of the Lodges. 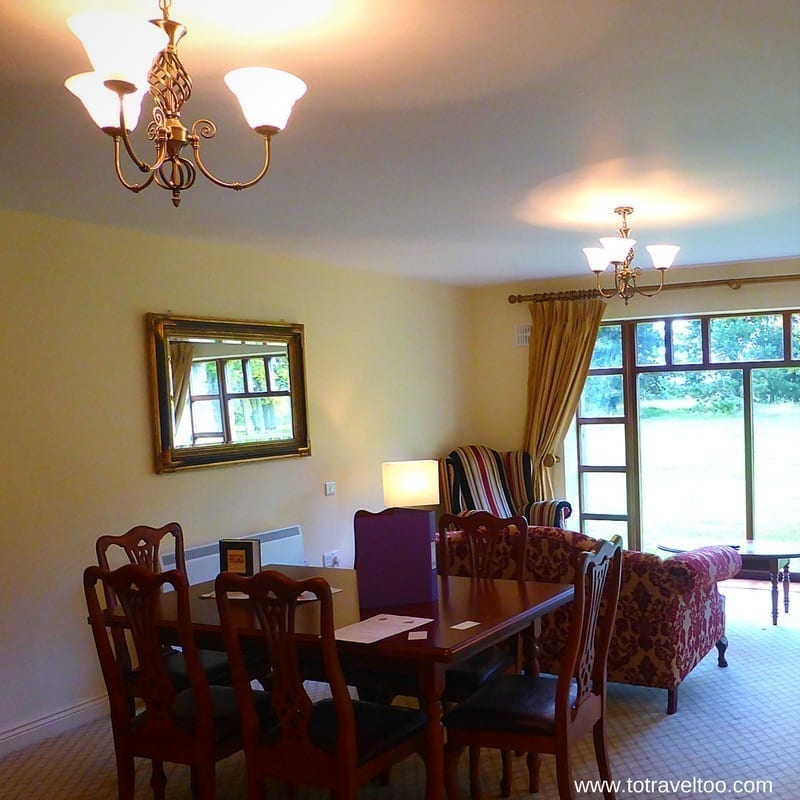 Lounge area at the Lodge Accommodation 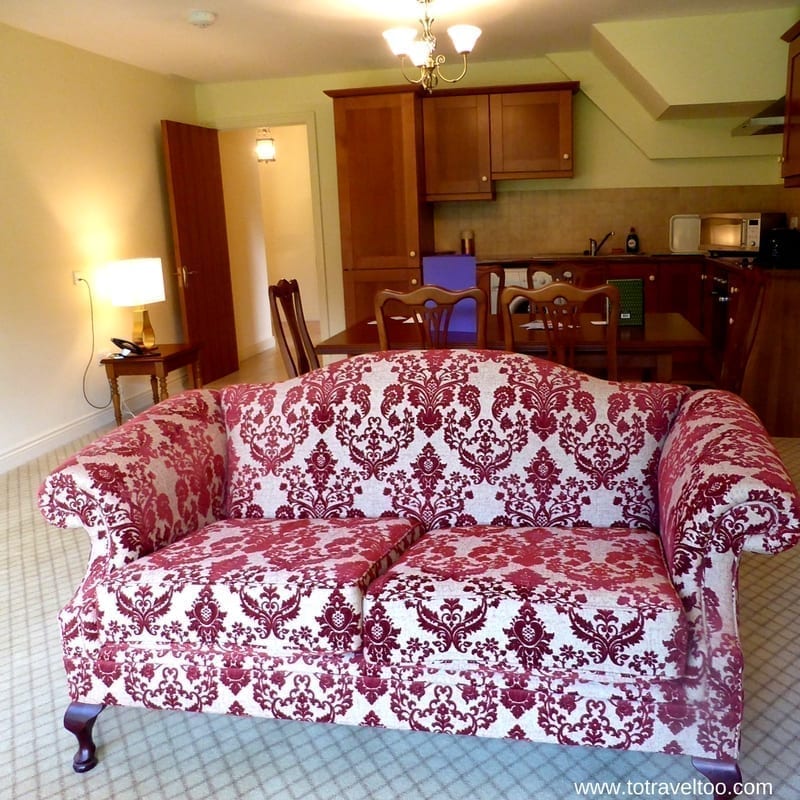 Kitchen at the Lodge Accommodation 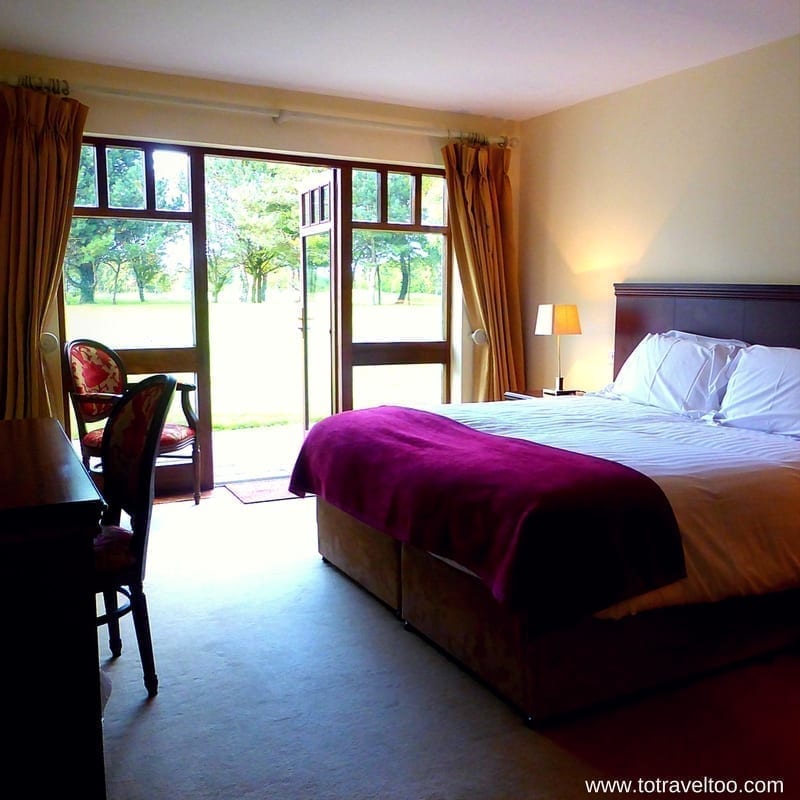 One of the 3 bedrooms

Opening the door we were astounded at the size, a large lounge area with expansive windows overlooking the grounds, a fully equipped kitchen and washing machine and 3 bedrooms to choose from.  The Lodges are perfect for families or groups of friends, your every need catered for. 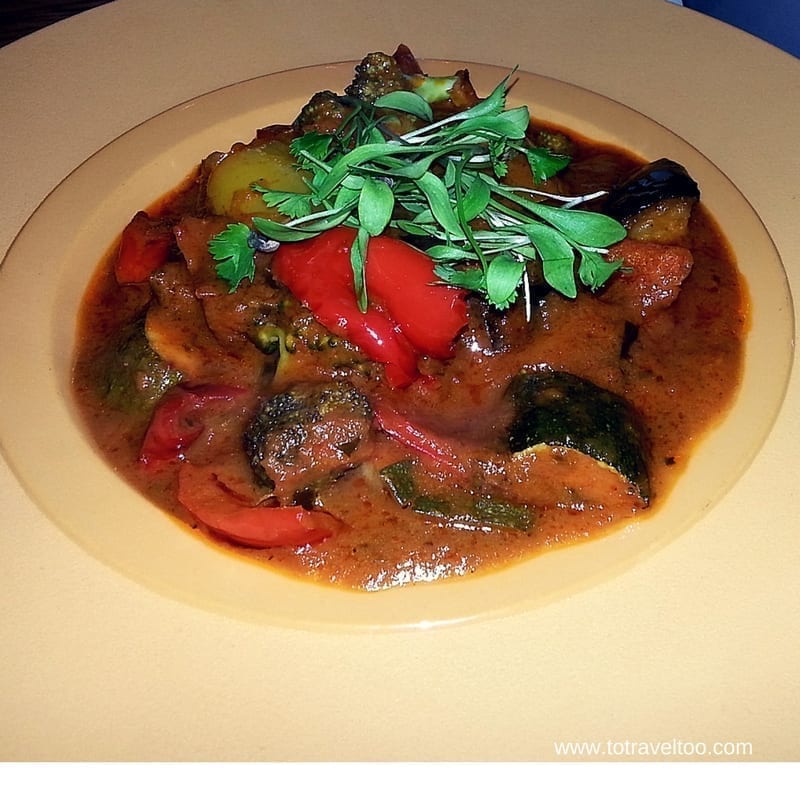 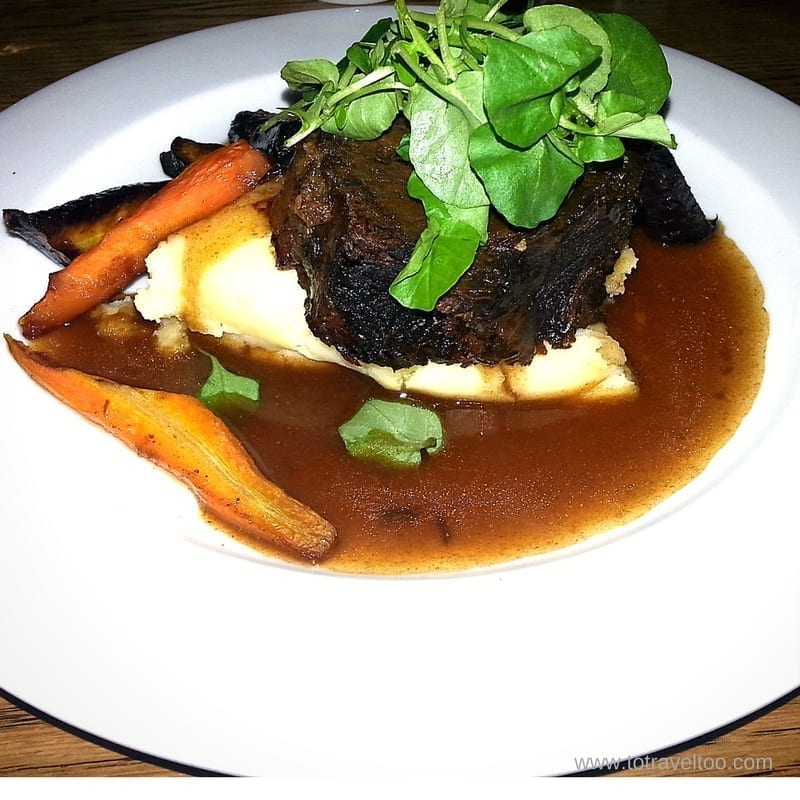 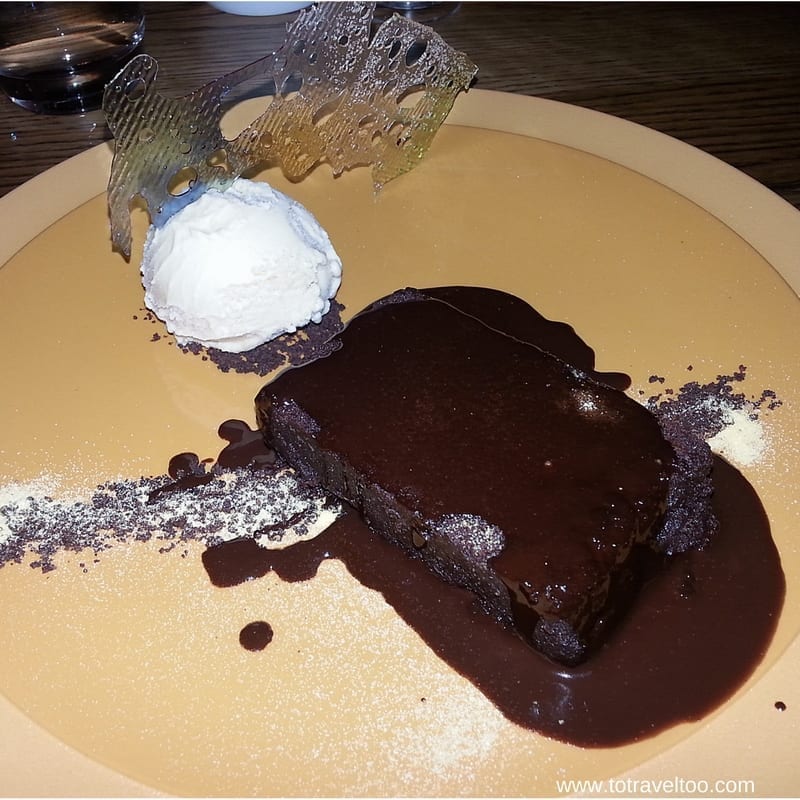 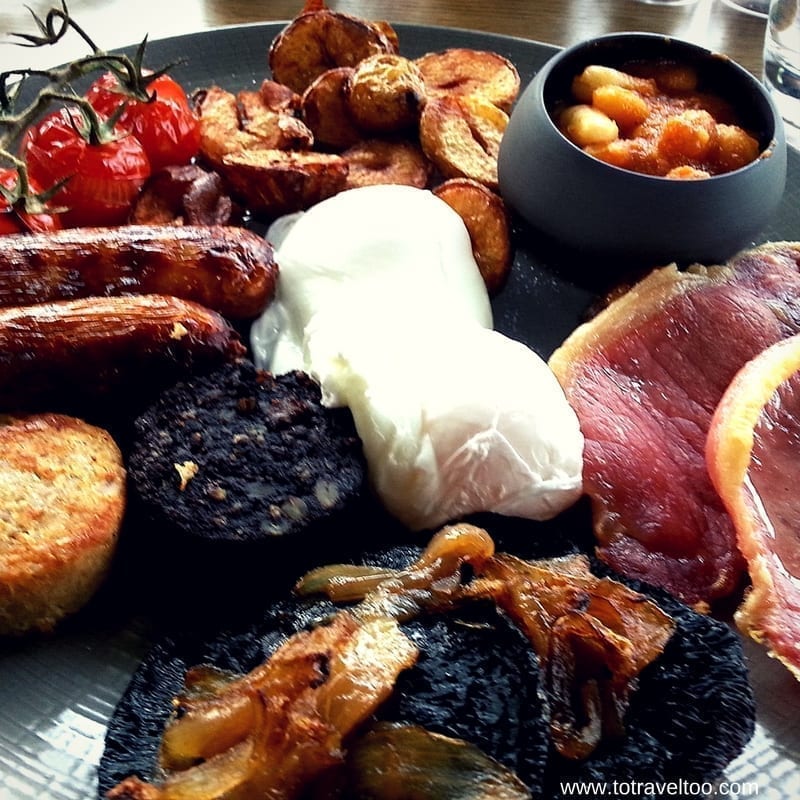 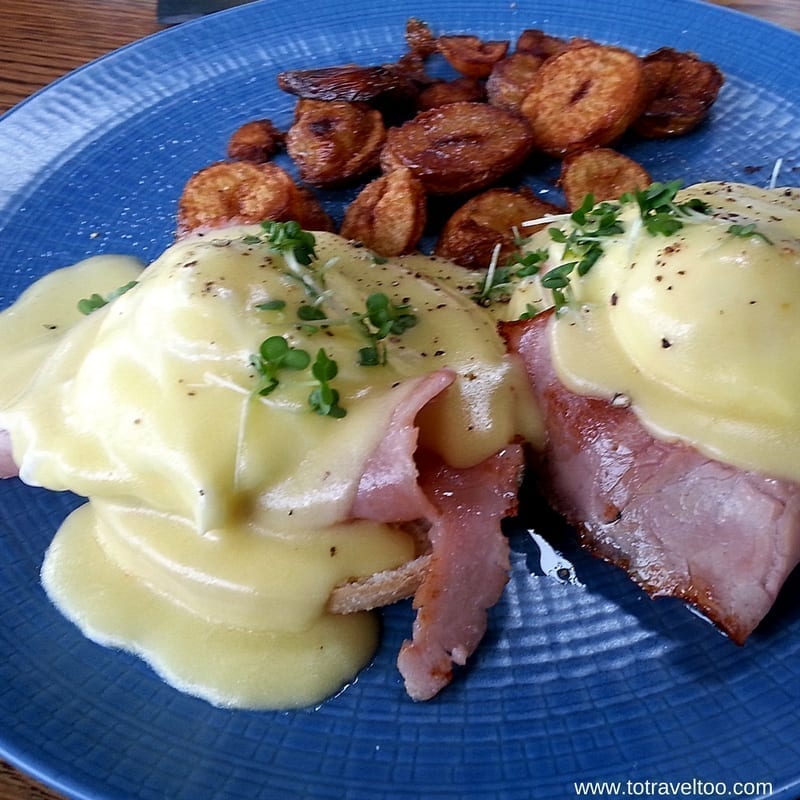 Breakfast was also in Hermione’s Restaurant where we ordered the Full Irish Breakfast and Eggs Benedict.

You can hire the whole Castle out for only Euros 6,000 per night! Now that is what we call an experience. 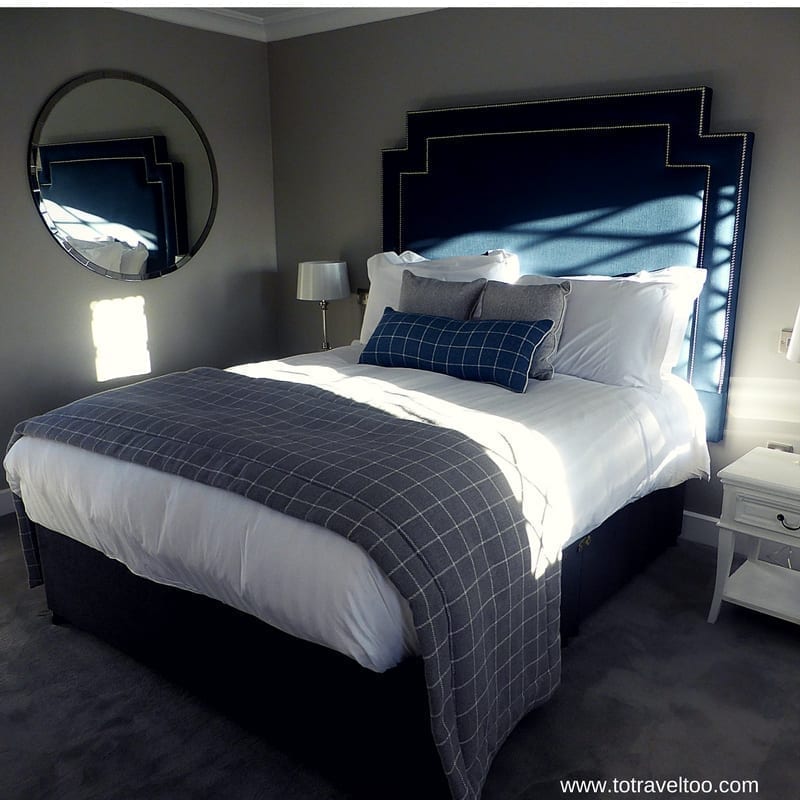 There are downstairs and upstairs carriage rooms available.  Those on the ground floor have their own individual doorways leading out into the courtyard and can also be interconnecting for families. The Carriage Rooms are decorated more like hotel suites, with modern furnishings and colours, ensuite bathrooms, fluffy white towels and crisp white linen, Wifi and TVs. 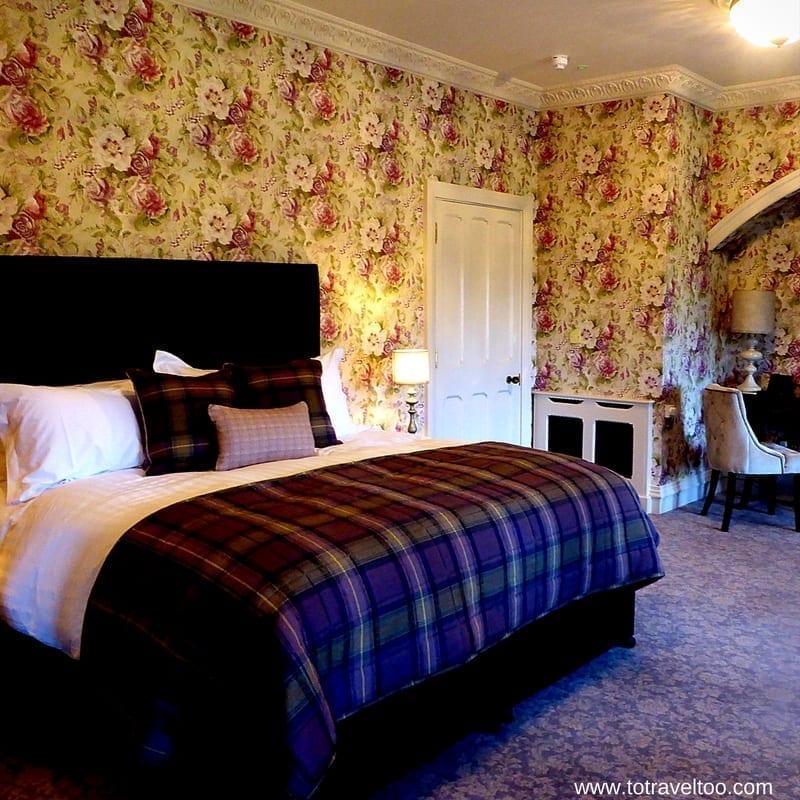 Examples of the Castle Rooms 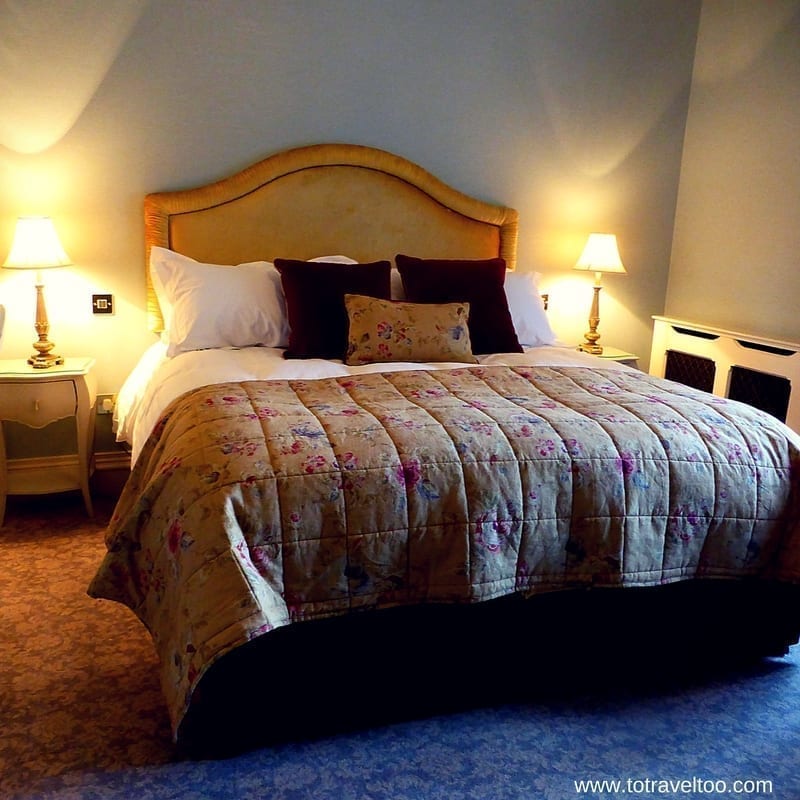 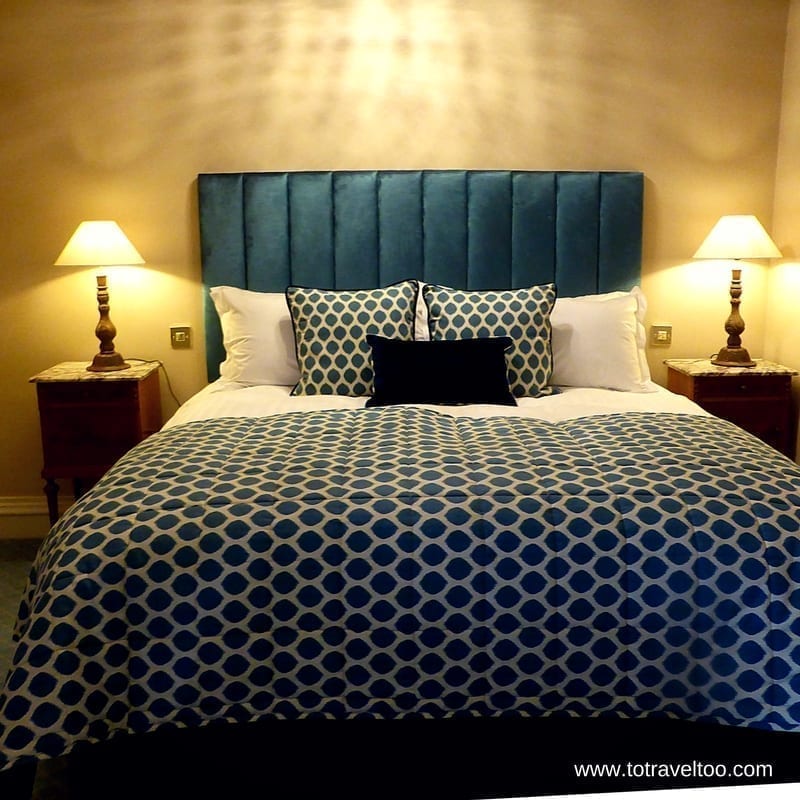 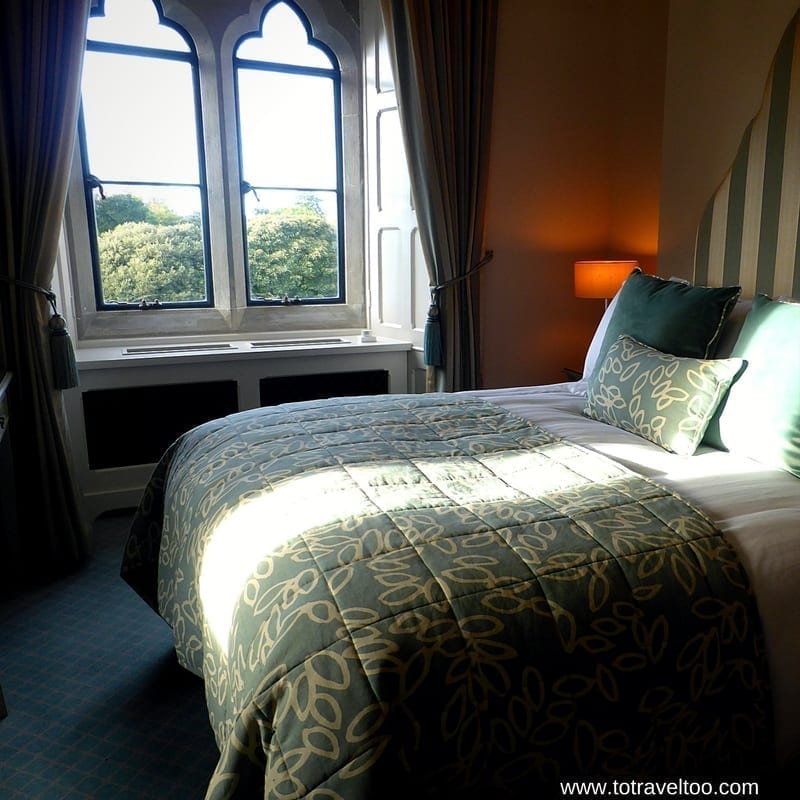 All the bedrooms have a story and have been named after a historical figure and all are individually decorated and have amazing views over the grounds, the Rose Garden or the River Greese. A full Irish breakfast is included and is served in the Great Banquet Hall that overlooks the Rose Garden.

Ernest Shackleton’s Room – he was an Irish Explorer from Kilkea. His bedroom is decorated in rich regal colours.

Lady Elizabeth Gray Room – she was married to one of the Fitzgeralds.  The room looks out over the 18 hole golf course.

Fitzgerald Suite – The Bridal Suite and is located right at the top of the Castle.

Wizard Earl Room – one of the smallest bedrooms

There are 1 bedroom, 2 bedroom and 3 bedrooms lodges available that overlook Kilkea’s Castle impressive 180-acre estate. The lodges include: 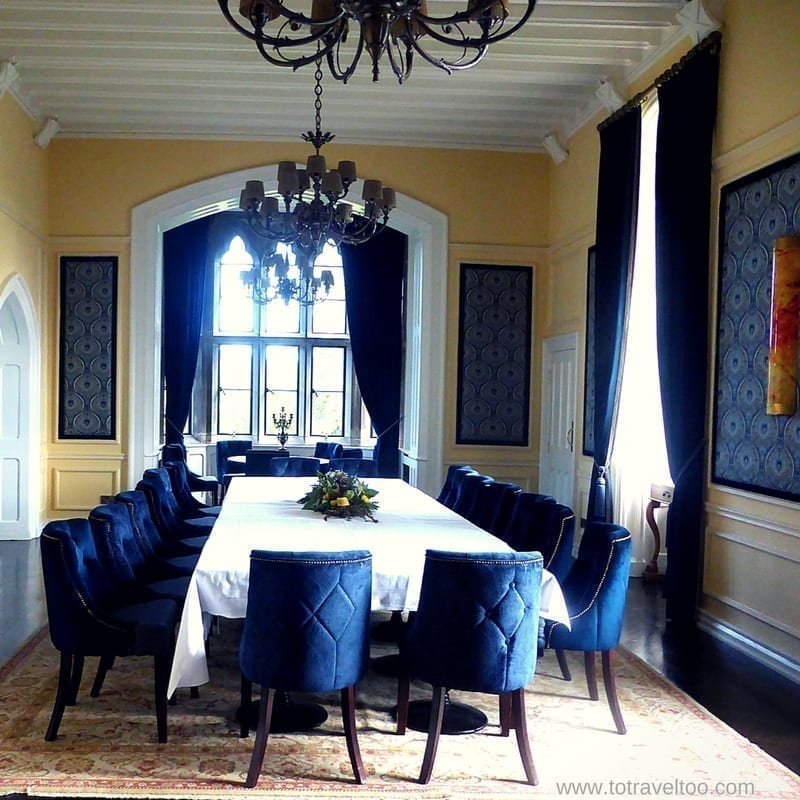 Castle Bar with expansive views over the Garden. Siofra explained that at ‘summer time the red roses are eye-catching’.

For that celebratory dinner, Hermione’s Restaurant offers stunning views over the ground and Castle – a fine dining experience. 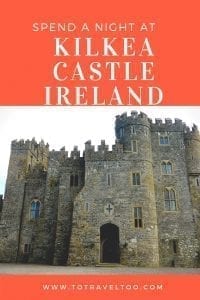 Things to do at Kilkea Castle 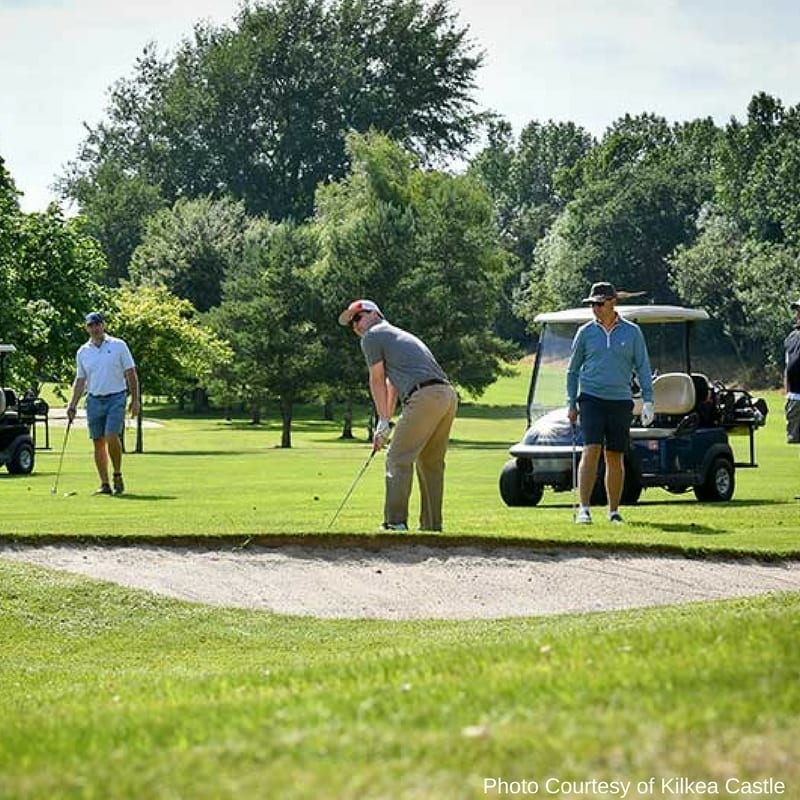 There is an 18 hole golf course available 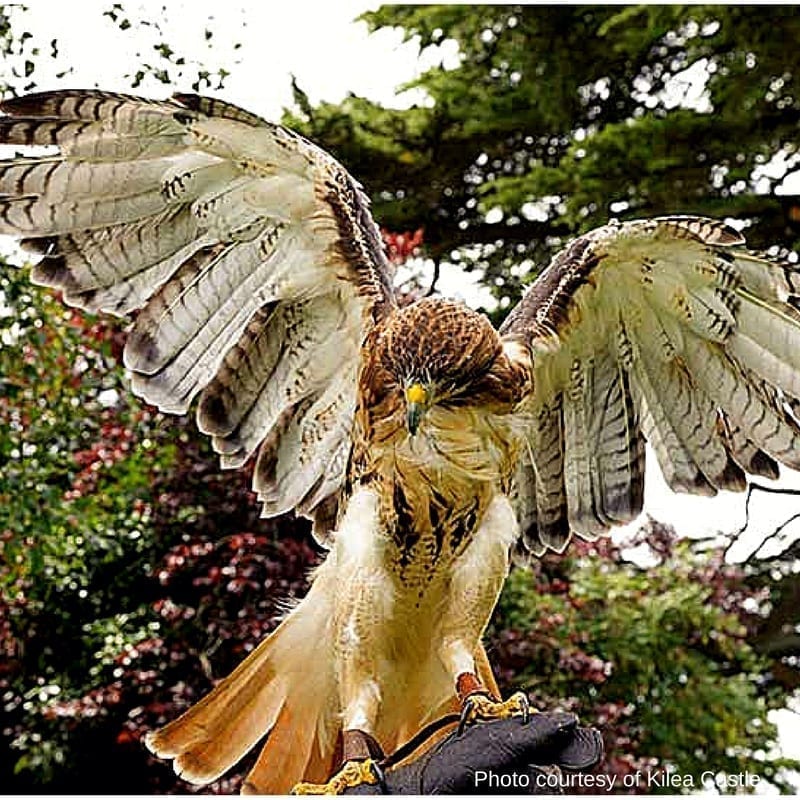 Float Down the Lazy River

Things to do Outside Kilkea Castle

Where is Kilkea Castle 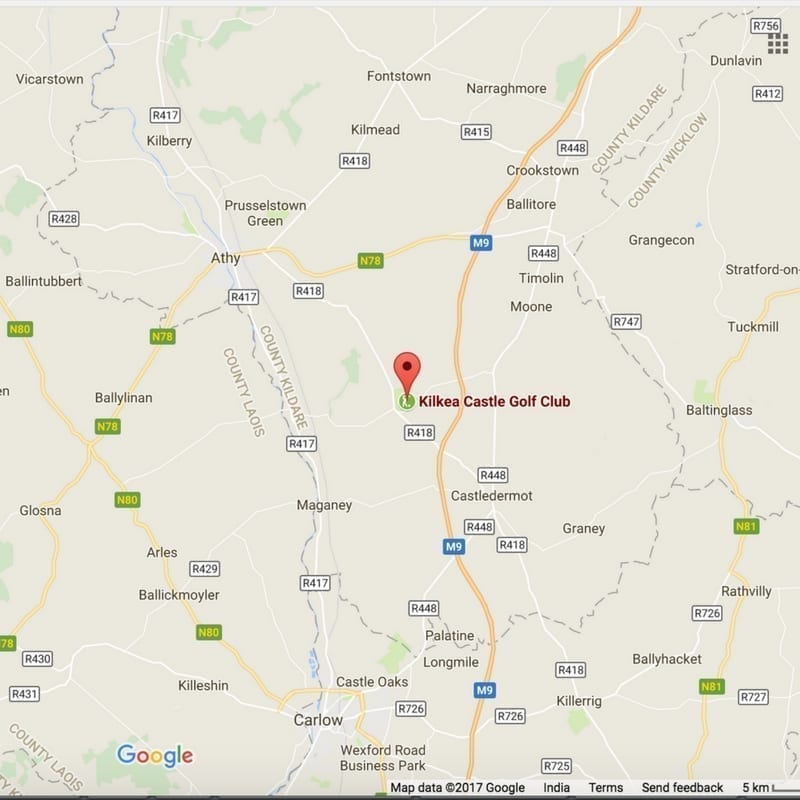 Location of Kilkea Castle in Kilkea

For Bookings and the latest deals:

We would like to thank Deidre O’Brien from Podium Hotels for our complimentary dinner bed and breakfast experience at Kilkea Castle.  We would also like to thank Siofra Ryan-Smith and team for looking after us so well. We must make a special mention to the staff at Hermione’s Restaurant who made our dinner and breakfast memorable with their very welcoming Irish hospitality.

If you would like to stay overnight in a Castle we highly recommend Kilkea Castle for a true castle experience.

If you enjoyed this article you may like to read our other articles on our 3-week road trip around Ireland:

A Night out at Killarney Brewing Company 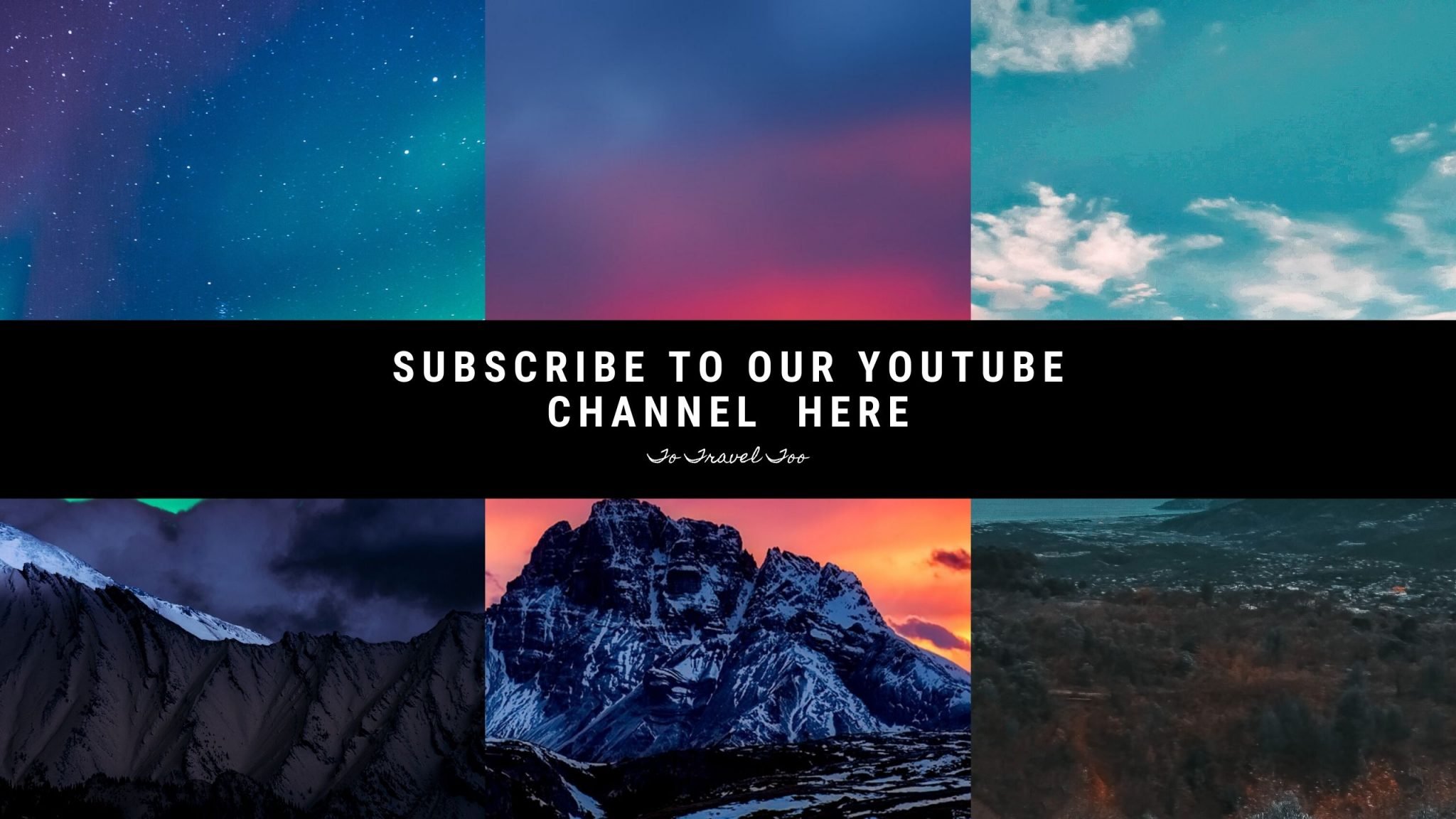 Hue, is one of Vietnam’s most important cities. To understand it’s importance in Vietnamese history a “Walk of Revolution Tour’ by one of Bee…