What do you get when you combine a walking tour, a food tour, and history highlights all in one in Bridgetown Barbados? The popular Lickrish Walking Food Tour of Barbados, but a word of warning, you will need to come feeling hungry, very hungry!

Over the years we have enjoyed many food walking tours in Porto and in Dublin.

Now, were you wondering what “Lickrish” means just like us? The Bajan word ‘lickrish’ means greedy for food.

Barbados food, we wonder what will be your favourite dish when you visit?

Opposite the statue of Errol Walton Barrow we stepped inside Zabelle’s.  Our first taste of local Bajan food – a meat roll.  Not just any ordinary meat roll (similar to a sausage roll but spicier and tastier) but one with mincemeat, local spices, chives and peppers wrapped up in shortcut pastry.  The general consensus was ‘definitely the best meat roll’ we had ever tasted.  After enjoying a refreshing freshly squeezed orange juice we were on our way.

Janelle is full of information on the local history of Bridgetown, how it got its name and how it became listed on the UNESCO World Heritage List in 2011.

We headed towards Chamberlain Bridge to not only admire the yachts and catamarans moored there in the water but to learn about the symbols on the arch. The Pelican represented the tiny island called Pelican Island which was located near the cruise ship terminal and which is now no longer there due to reclamation for the Deep Water Complex.

The national flower – “Pride of Barbados” can also be seen on the arch – a fiery red and yellow Dwarf Poinciana, this flower blooms all year round and can be seen throughout the island.

The dolphin shown on the left-hand side of the arch represents the important fishing industry of Barbados and the top of the arch reveals the Barbados Coats of Arm.

The pledge of Barbados is also represented on the bridge:

“I pledge allegiance to my country Barbados and to my flag,

To uphold and defend their honour,

And by my living to do credit

To my nation wherever I go.”

We then headed across the bridge and walked down the boardwalk alongside Wharf Road.  We have actually walked this boardwalk a few times in our visits to Bridgetown but have never noticed the plaque dedicated to the African slaves who were sold to Barbados Plantation owners.  Janelle pointed out a book that was written by one of the slaves of his life – “The Life of Olaudah Equiano” which is still available through Amazon.

Time to head to Tasting #2 but before we did we needed to find out a bit more about National Heroes Square, the War Memorial, the Dolphin Fountain, the Parliament Houses and the busy Broad Street.

Apparently, the statue of Lord Nelson here predates Nelson’s Column in Trafalgar Square in London.  Lord Nelson sailed into Barbados on 14th June 1805 in the flagship HMS Victory.  He was a hero in the eyes of the Barbados people as he fought against the French and their supremacy in the Caribbean Islands.

Since 28th April 1991 the Square where Lord Nelson stands has been renamed to National Heroes Square.  National Heroes Day is celebrated on 28th April each year.  There are 9 men and 1 woman National Heros of Barbados all playing a part in making Barbados what it is today. Fans of cricket will be pleased to know that one of the National Heroes is none other than Sir Garfield Sobers!

The War Memorial which weighs 32 tons and stands at 37 feet high was erected in the memory of all the Barbadians who fought in World War 1 and 2.

The Dolphin Fountain, which is void of water, was built in 1865 to commemorate the availability of the running of pipe water to Bridgetown in March 1861.

The Parliament Buildings around the Square represent the  Chamber of the Senate, House of Assembly, National Heroes Gallery and Museum as well as the Clock Tower.

We headed upstairs and straight out to the balcony that overlooked Broad Street.  There was a cool breeze blowing and we were glad that we had water that was given to us at the beginning of the tour by Chris, one of the owners of Lickrish Tours.

Our tasting was local salt bread with local cheese and locally grown lettuce.  On our way out we stopped and checked out the rest of the meals available at the restaurant and we have decided to head back to Bridgetown and enjoy a meal.  On offer today was a large variety of vegetable dishes such as green bananas, creamed yams, steamed breadfruit with an array of meat and fish.

Back on the walking tour again we head down one of the side streets learning about the fire that destroyed 80% of the town back in the 1700s along the way.

Palmetto Market in High Street was our next venue.  Here we met Lyon and his red sorrel juice.  When sorrel was mentioned our thoughts went straight to the green sorrel that we are used to in Europe which is used as a herb in salads and soups. This type of sorrel which is grown in the Caribbean has many health benefits such as:

The sorrel was so good we just had to buy a bottle off Lyon.  Lyon was an amazing character making his own vegan ice cream, cheese, and even peanut butter.  Lyon mentioned two types of Mango here in Barbados – Julie and Pawi, we were given the sweetest Julie variety for tasting.

We headed next to the Jewish Synagogue.  The Jewish Community has had an on and off history in Barbados since the early 1600s.  The current Synagogue was rebuilt after a hurricane destroyed it during 1831. Thanks to an injection of funds from the Barbados National Trust the Synagogue has now been restored.  Next to the Synagogue is the Museum as well as the Mikvah which was uncovered during a dig by two Israeli archaeologists back in 2008, it dates back to the 17th century.

The Legendary Fish Cakes are made out of salted cod, flour, spices, baking powder, chives, garlic, onion and sweet pepper which is deep fried and served with the local very spicy Bajan Pepper Sauce or tomato sauce.  You must try the Pepper Sauce but use it sparingly.

Another legend in Bridgetown is Mrs. Brathwaite and her famous biscuits, banana bread, coconut cake, bread, and pastries.  She bakes 4 times a week and has her stall on Wednesdays and Fridays.  Our tasting consisted of two biscuits – ginger and molasses, both full of goodness, coconuts, spices and lots of other special ingredients.

We had frequently passed by St. Mary’s Anglican Church on our way to the Cheapside Market in Bridgetown and now we were able to find out some of its historical importance as it was our next stop.  It is a beautiful church built in the neo-classical style. We learned that one of the National Heroes of Barbados is buried there in the church grounds – Samuel Jackson Prescod who was one of the first non-whites to be elected to Parliament in 1843.

Back on Broad Street, we head to Ryanne’s Restaurant and Bar to taste their local vegetable soup specialty.  We head out to the coolness of the upstairs verandah and people watch whilst enjoying the tasty soup.  The soup was filling and we still had one more tasting.

Our last and final stop of the tour at Mustor’s Harbour Bar & Restaurant to enjoy Barbados’s National Dish – Cou cou (similar to polenta but made from cornmeal and okra) and their famous ‘flying fish’.  A delicious home-cooked meal washed down with the local Barbados drink – Mauby – definitely an acquired taste.

The general consensus from our group whilst we chatted and ate was that this tour was a highlight of Barbados.

If you are enjoying our article why not PIN it for later: 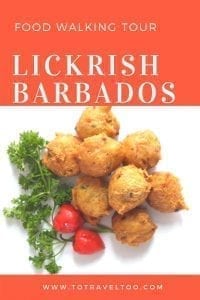 Wear comfortable shoes and make sure you have sunscreen.  A large bottle of water is given at the start of the tour and you can enjoy more water at the restaurants along the way.

We thank Janelle and Chris from Lickrish Tours who gave us this opportunity to be a part of their Bajan Walking Food Tour in Barbados.  Although this was a sponsored tour, as always, our opinions are our own.

When booking your Barbados Holidays consider the time of the year to travel.

The temperature in Barbados does not fluctuate too much throughout the year.  With lows of around mid to lows 20s and highs up to the 30s.

The rainy season runs from May through to December which also coincides with the Hurricane Season.

The Dry season is from January to end of April which is also high season for travellers especially those from Northern Europe and the US/Canada escaping the winter.

Sandy Lane Barbados is the #1 luxury hotel on the island.

Sandals Barbados is the most famous of all the all-inclusive hotels in Barbados.

We have selected a range of Barbados hotels for you to consider on your next Barbados holiday.

You can easily rent a car on arrival at Barbados Airport. Click here for more details.

We have a To Travel Too Travel shop with over 800 travel-related products e.g. luggage, guide books, clothing etc. Click here to check it out.

Read more of our adventures in Barbados

Our extensive Barbados An Insider Guide

Enjoy eating at one of our favourite Barbados restaurants – Tapas Barbados

Round Island Tour with Glory Tours

We recommend travel insurance when you book and pay for flights, tours and cruises. 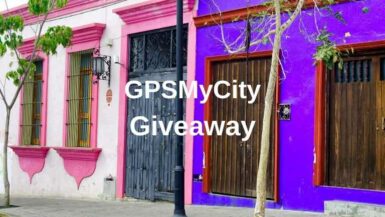 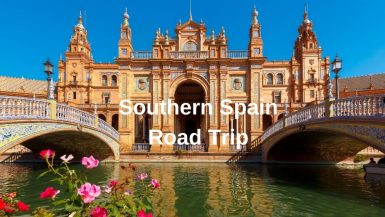 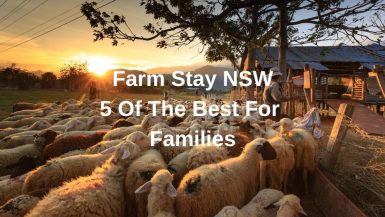