If one day in Dubrovnik is all that you may have time for you need to make the most of your time. Whether you are arriving in Dubrovnik by a Croatia cruise or combining holidays to Croatia with another destination, most of your time will be taken up inside the Dubrovnik Old Town and the Walls of Dubrovnik.  They are spectacular and one that we highly recommend you visit and you must be prepared for the 2km walk.

Of course, if you have time we would suggest spending at least 3 days in Dubrovnik ideally a week and include the surrounding areas as there is so much to see and do. For those who want to visit Croatia beaches, we can recommend that Dubrovnik beaches are some of the best to visit during your stay as well. One day in Dubrovnik Croatia will certainly whet your appetite for a further visit.

As Dubrovnik is a popular destination we recommend that you book your Dubrovnik hotels in advance.

What To Do in Dubrovnik
We have just published our guide on [easyazon_link keywords=”B079QLGMLG” locale=”US” tag=”totraeltoo-20″]What To Do In Dubrovnik [/easyazon_link] on where to go, what to do, where to eat in and around Dubrovnik.

Things to do in Dubrovnik Croatia

You may want to consider downloading our article before you wander Dubrovnik.  Click our link below for more information.

When you visit Dubrovnik old town make sure that you allow time to visit the:

All are located within an easy walking distance of one another inside the Dubrovnik Walls.

There is a  level of excitement when you first set eyes on the huge walls in front of you when you arrive at Pile Gate, one of the three entrances to the Old City of Dubrovnik.

There are 2km of ancient walls to walk around, a photographers delight, our recommendation is to arrive there when the gates first open.  We entered through Pile Gate at 8.30am one morning in September with a view of beating the thousands that arrive from the cruise ships.  At this time of the year, Dubrovnik is still hot so we recommend taking enough water for a 2-hour wander. 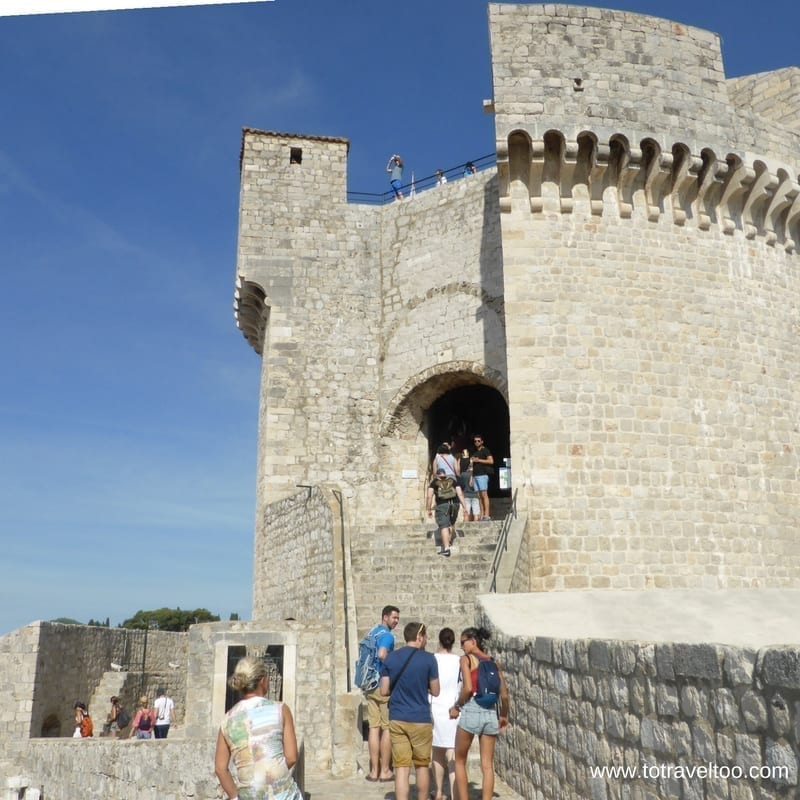 For those Games of Thrones fans you will recognise some of the locations, and for those of us who are not, you will marvel at the view across to St Lawrence’s Fort just outside the Dubrovnik city walls to the West of the City (Kings Landing to the Games of Thrones fans!) You need to walk in a counter-clockwise direction as in certain areas the path is quite narrow.  At times you are at a height of 25m with walls with great views over the city and the harbour and in some areas, there are walls measuring 6m thick.  There are 3 round, 12 rectangular and 2 corner fortresses with 15 bastions to enjoy.

Opening Hours: Check as they differ throughout the year

Dubrovnik Cafes in the old town

As you walk around you can rest and enjoy a cold drink or coffee at one of the several cafes.  We would recommend an early sunset drink at Buza Dubrovnik.  Buza Bar is a hole in the wall overlooking the ocean on the cliffs, it can be very busy just before sunset so we would recommend that you arrive early. 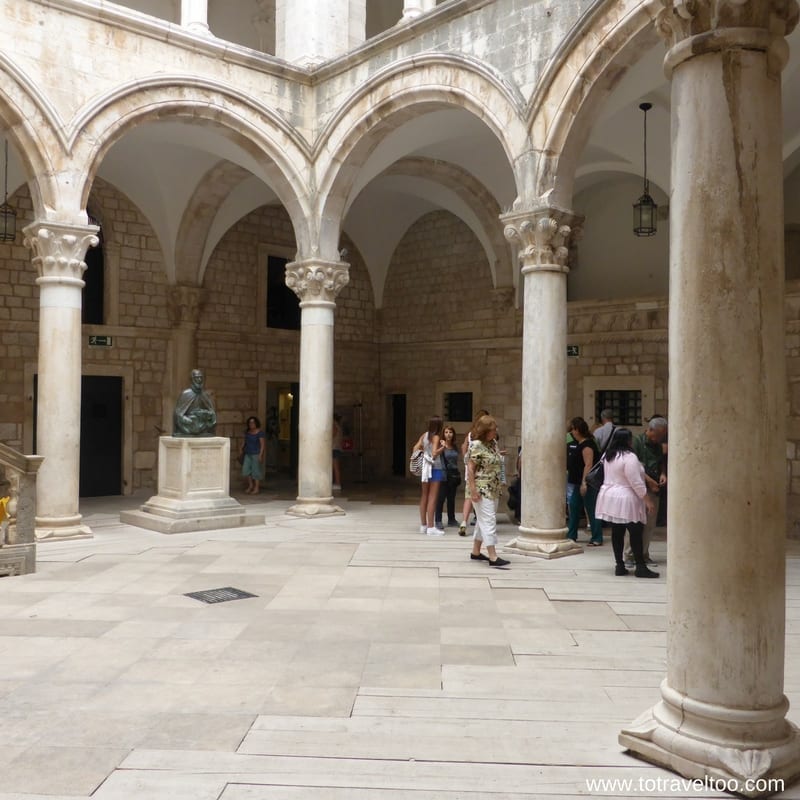 Inside the Rectors Palace

The Head of the Republic, the Rector, whose term only lasted one month could only leave the Palace on official holidays or religious holidays. He could stand for re-election after a 2 year period.  It was a clever way of handling any potential corruption.  Pity, it can’t be enforced today!

On the ground floor you will notice a bust of Miho Pracat – the only citizen of the Republic who has had a monument dedicated, he was a wealthy citizen who left his entire wealth to the Republic.

After an earthquake during the 17th century, parts of the Palace that were damaged were rebuilt in the Baroque style.

Today, it is a Cultural History Museum where you can visit the offices and the Quarters of the Rector.

Opening Hours: Check as they vary throughout the year

NB: Photographs are not allowed in the Offices and the Quarters of the Palace 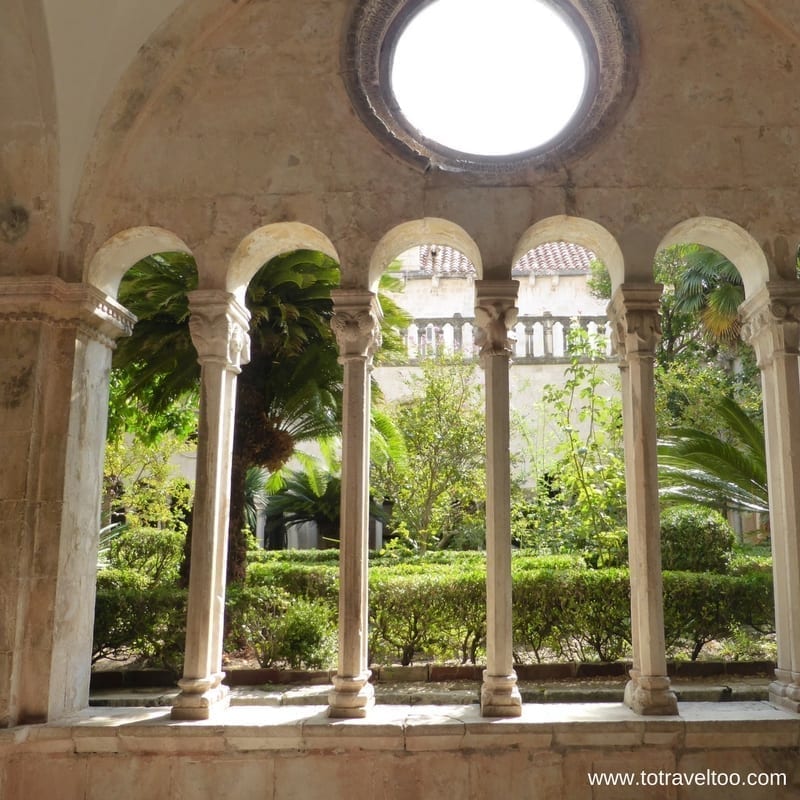 The Franciscan Church and Monastery consists of a Pharmacy, the Church, the Monastery and the Library and is situated on the Stradun in the Old City.

The Museum is based around a courtyard of orange trees and contains pharmaceutical instruments and presses, dating from 1317 that was used by the Old Friars in their Pharmacy.   The Cloister is decorated with remnants of old frescos.  The Pharmacy is one of the oldest in Europe, with its Library as one of the most valuable.

Once inside be sure to check out a copy of a painting that depicts how Dubrovnik looked before it suffered damage during the earthquake of 1667.

You can also see a tablet with a Latin inscription that states in 1527, 20,000 Dubrovnik inhabitants died of the plague.

We felt a calm and serene atmosphere as we wandered around the corridors that looked out upon the sweet-smelling orange trees that were growing in the courtyard.

Opening Times: Check as they vary throughout the year 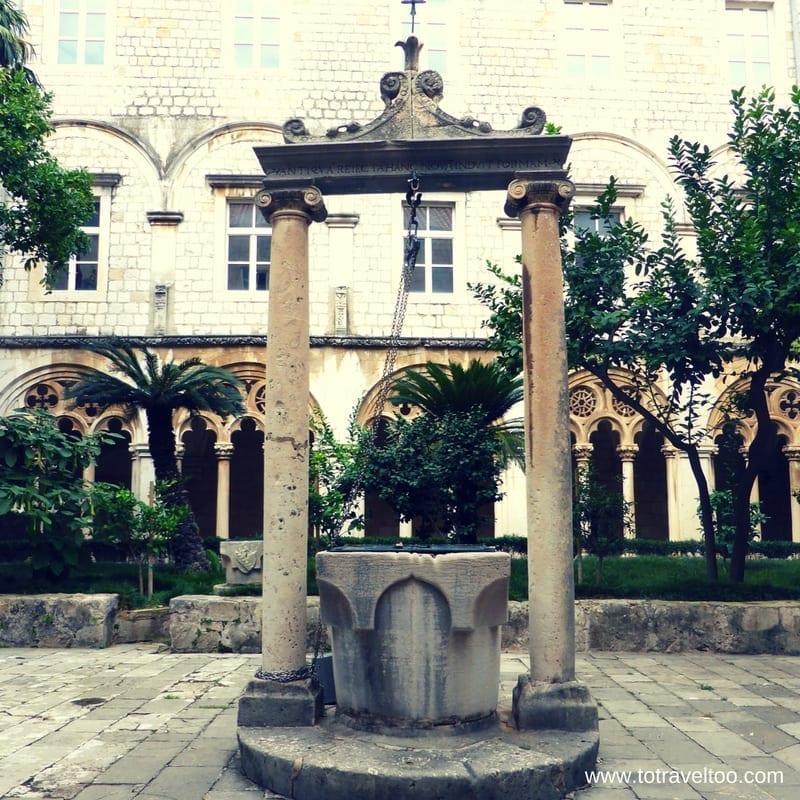 The Dominican Order was founded during the 13th Century in Dubrovnik.  The Church and the Monastery completed construction during the 14th Century. The Monastery is similar in style to the Franciscan Monastery, based around a courtyard where we experienced the same peace and quiet.

The Museum is located in the Cloister of the monastery.  There are works of art from the Dubrovnik painting schools from the 15th and 16th centuries.  It houses an important library and art collection even Titian’s effigy of St Magdalene and St Blasius and Veneziano’s ‘crucifixion.’

Opening Times:  Check as they vary throughout the year 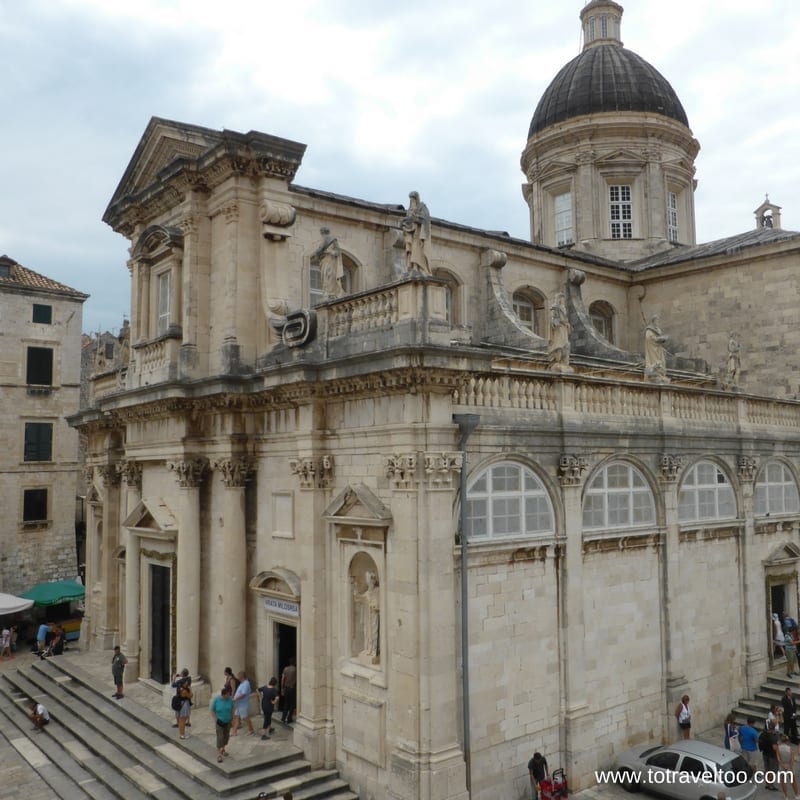 View of the Cathedral from the Rector’s Palace

The Cathedral was built between 1672 and 1713 on the site of an earlier 12th-century Romanesque cathedral that was destroyed in an earthquake of 1667.  Legend states that Richard the Lionheart built the 12th-century Cathedral for the city after he was rescued from a violent storm close by on the island of Lokrum.  Originally the money was intended for a Cathedral on the island but the clever heads of the Republic persuaded him to use the money for a cathedral in Dubrovnik instead.

After the earthquake of 1979, construction workers found evidence that a Byzantine Cathedral was originally built on the same spot in the 7th or 8th century.

Located above the main altar there is a painting by Titian of “The Assumption of our Lady”.

To visit the Treasury there is an entrance fee of 15 kunas per person.  It comprises gold and silver relics from the 12th to 19th century crafted by Dubrovnik goldsmiths.

There are many hotels in Dubrovnik to choose from. These are some of the most popular:

If you wish to stay in an apartment we can recommend Apartment Nikol which is located outside the city walls overlooking the harbour with an amazing view.

For further information on where to stay in Dubrovnik and their top 10 hotels check out TripAdvisors Top Hotels.

If you are enjoying our article why not PIN it for later: 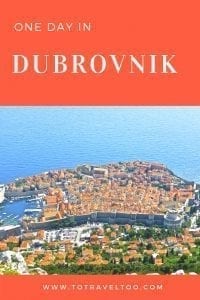 The main Croatia Airport is Dubrovnik Airport located 15.5km from Dubrovnik.  There are many cheap flights to Croatia from all over Europe.  Taxis can be expensive, there is the Airport Bus which will drop you at Pile Gate and then you can catch a taxi from there to your accommodation.

Rental cars are available from the airport.

Dubrovnik has a Mediterranean climate, hot dry summers and cool wet winters.  Sometimes during winter you can experience snow.  The hottest month is July.

Croatia is a beautiful country to travel around.  We found travelling by bus easy, comfortable and affordable. We thoroughly enjoyed our travel in Split and Zagreb.

We thank Sandra and her team for their assistance during our stay in Dubrovnik.  As always our opinions, are our own.

If you enjoyed our post on Dubrovnik you may enjoy our other posts:

Why Croatian Wines Won Us Over

Chairlift and Dinner at the Panorama Restaurant 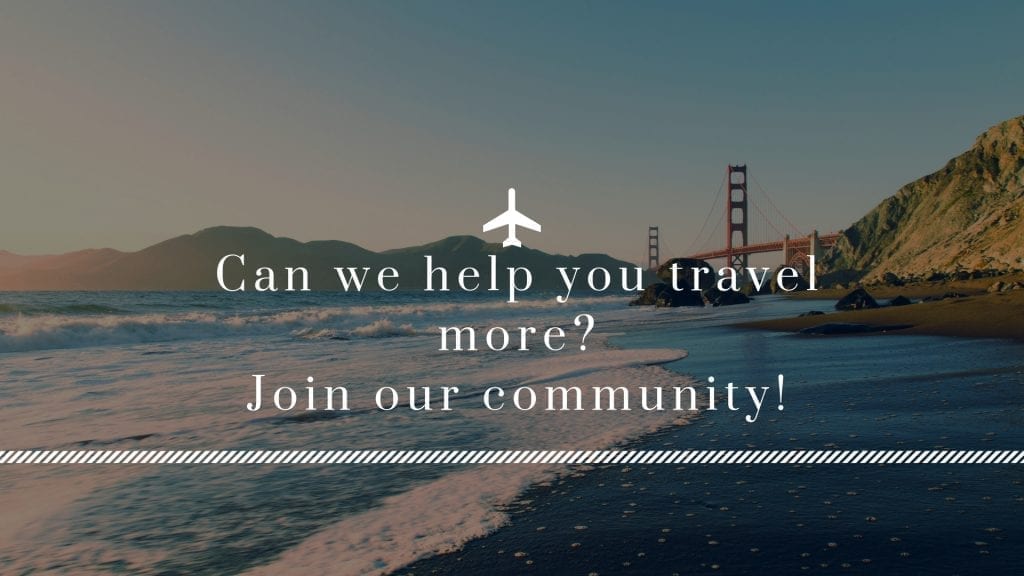 Contents1 Do you dream of travel? 1.1 Planning Your Dream Vacations1.2 Start Planning1.3 Save, But You Don’t Need to be Rich to Travel1.4 Optimize…