A great way to see a town or city is to take a private tour with a local guide. To fully understand the city of Merida in Mexico we reached out to Yucatan Travel to assist us.

“Humberto is the top guide in Merida and he is famous,” said Maria from Yucatan Travel.  We were heading back from the restaurant Crabster in Progreso after experiencing one of the best seafood meals we had in over a year. Progresso is a port city 30 minutes out of Merida, with silvery-white beaches and the longest pier (6.5km) in Mexico. With many restaurants to choose from along the beachfront, Maria’s choice of the recently opened Crabster was well received by us.

As we arrived at the Wyndham Hotel where we were staying, Humberto was there waiting for us eager to get started.  Humberto, with the cheeky smile, and of indeterminate age, greeted us warmly and settled into the front seat of our minibus. “Vamos,” he said to our driver Jorge and off we went.

It wasn’t till later when we were relaxing back at the Wyndham and we googled his name –  Jose Humberto Gomez Rodriguez that we found out why he was famous. What a humble man! His assignment today for Yucatan Travel was to show us his Merida, the colonial Haciendas that lined Merida’s famous street Paseo de Montejo culminating at the Cathedral in Merida’s main square.

Why was Humberto famous? Humberto’s Grandmother worked for the famous Barbachanos family who owned the Mayaland Hotel and Hacienda Chichen Itza located by the Mayan site Chichen Itza.  Growing up this was Humberto’s playground. Around the age of 8 in 1944 he was given directions to a cave not far away by the head gardener of the Mayaland Hotel. Over the next few years, he managed to explore deeper and deeper into Balam Canche (jaguar throne) the name given to the cave.    Skip a few years to 1959 when he was just 23 years of age!

The small group he was tour guiding around Chichen Itza were exhausted and wanted to rest.  They were close to the cave, Humberto gave them a flashlight to explore the cave and he took off down one of the paths that he had travelled over 100 times.  On reaching the end he noticed that the wall looked different, he scraped some of the stuccoes off and found a secret wall. With his wiry thin body, he managed to squeeze through the small gap, travelled down some new unexplored paths and ended up in a sacred chamber face to face with none other than the Mayan Rain God – Chaac, an impressive artefact. He had stumbled across a very secret place, there were Mayan artefacts all around him. Cutting a long story short his discovery was a major find for the area, it is well documented in an article in Yucatan Living. The article explains about the excavations that took place and the Mayan ceremony held to ensure that the Rain God Chaac was appeased.

Merida in the eyes of a local

Humberto was speaking from the heart as a passionate local as we started our tour down what is known as the “Champs Elysee” of Merida – Paseo de Montejo. 5 miles long, this street was the dream that came to fruition from the Sisal Barons who travelled to Paris and wanted to replicate what they saw. Large wide tree-lined boulevard architecturally superior palaces and mansions filled with the most expensive interior designs and furnishings of the time.

When artificial twine was invented the Sisal Barons lost their fortunes and moved to Mexico City, leaving their mansions, to start over again.  The mansions and palaces fell into decay as the poorer people who moved in could not afford their upkeep. It is reported that there are 40,000 abandoned buildings still in Merida.

These days some of the buildings have been restored and have been purchased by hotels, banks and insurance companies. Some are decaying rapidly as funds are not available for the upkeep, there are even somewhere families have just left them to decay, trying to live in them till the very last moment.

He remembers the prosperous times when this part of Pasejo de Montejo was so important to the economy of Merida but his heart was saddened to see such decay happening. 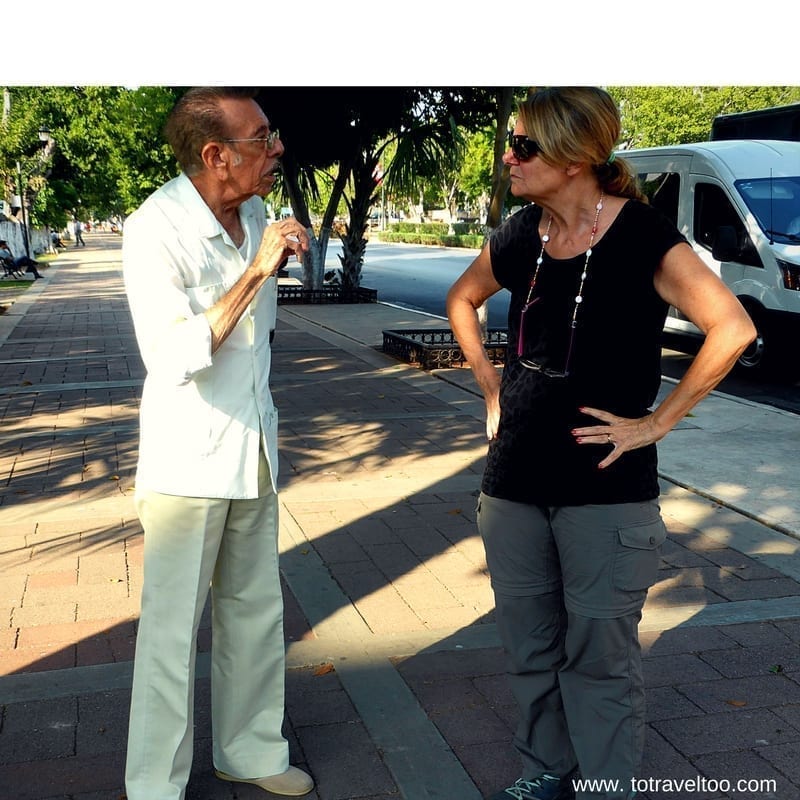 Humberto and Jane discussing the haciendas of Merida

Walking with Humberto down Pasejo de Montejo, Humberto related tales from his past. He talked about the beauty of the buildings, their architecture, their follies, when the buildings had changed hands and to whom, the parties, the splendour of the interior design and those prosperous times of Merida. He could recall stories that his grandparents told him of the well to do families and how they made money from ‘the green gold of the Yucatan’ – ‘henequen’ (Yucatan sisal).  He can remember entering some of them, ceilings so high his neck ached just looking up, marble floors so white and slippery and furniture that he was told ‘look don’t touch’. 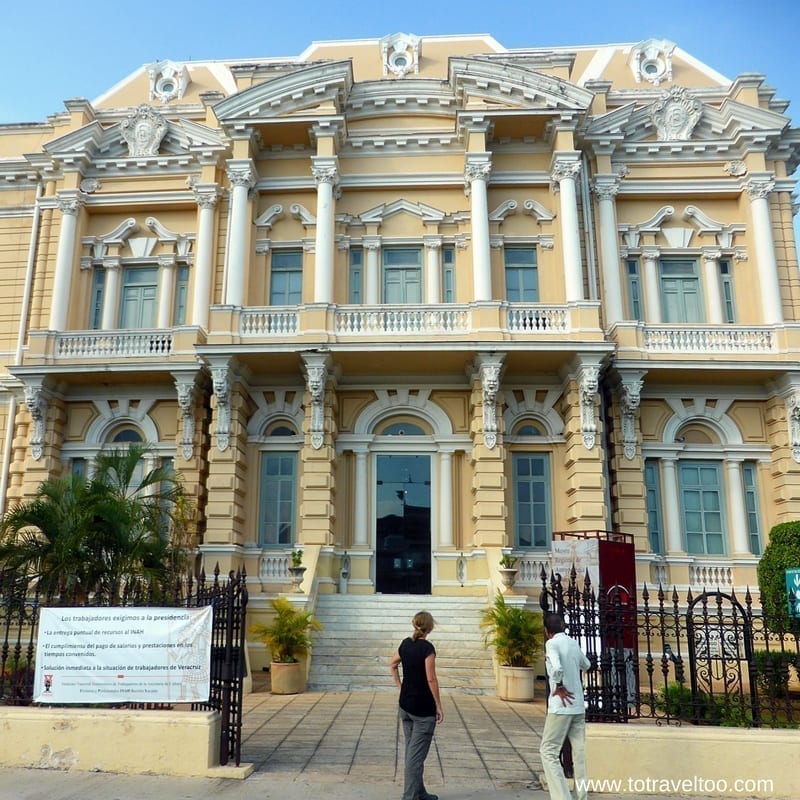 Built in the early 19th Century for one of Merida’s most famous Military person and who in 1890 was the State Governor of Yucatan – General Francisco Cantón Rosado.  It is now the Regional Museum of Anthropology and History. 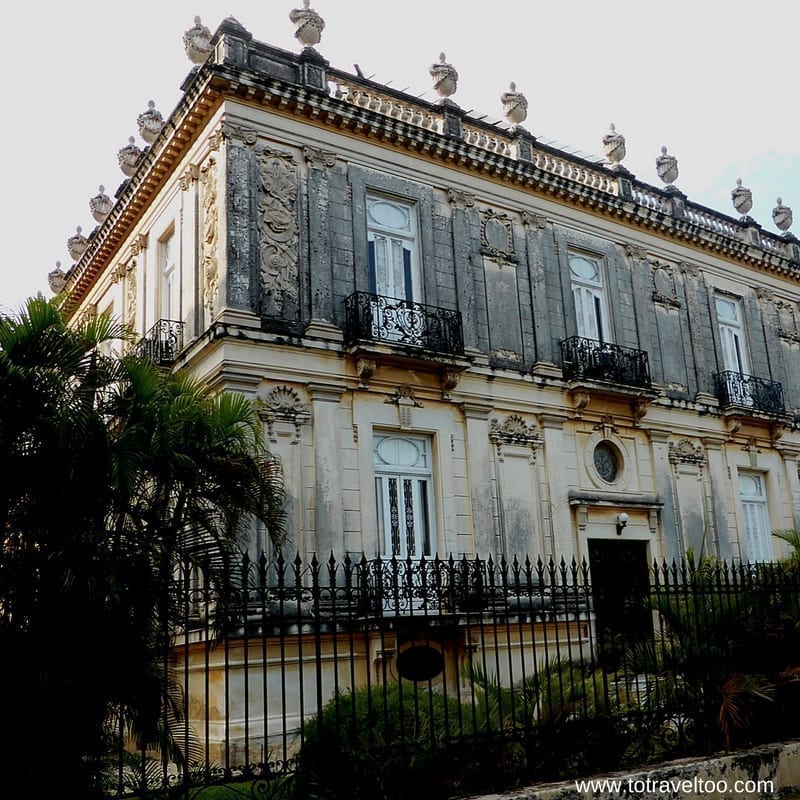 This is one of the twin houses.

I took a double-take! (no pun intended). Two mansions exactly the same side by side. Humberto smiled, I was not seeing things.  The Chamber Brothers,  Ernesto & Camilo in 1906 bought plans back from France to have two identical mansions built – one for each brother on the same block of land. The mansion on the left was left unfinished, the one on the right included a top floor. The two different families who now own the mansions have put in a request to the local government to separate each property with a fence – their request has been refused. 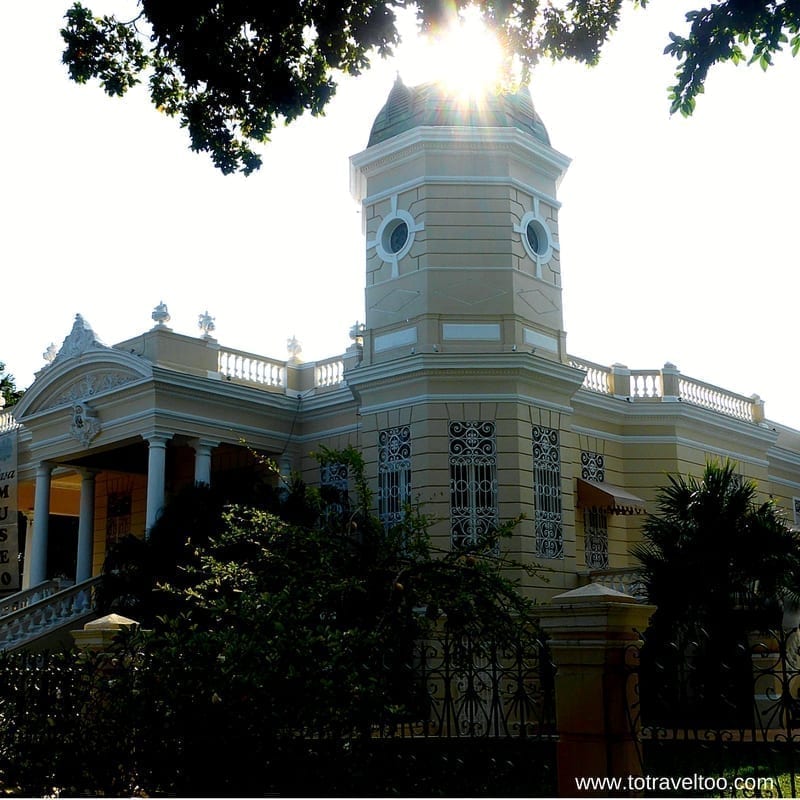 We passed another mansion which is now a museum.  The Quinta Montes Molina was constructed by the Cuban family Portuando Regil in 1902.  Senor Molina, who made his fortune from ‘henequen’ in the Yucatan, later purchased the home.  Today when you enter you the home you can marvel at the antique furniture, Carrara marble floors, expensive baccarat and Murano crystal chandeliers and art deco pieces over 120 years old. 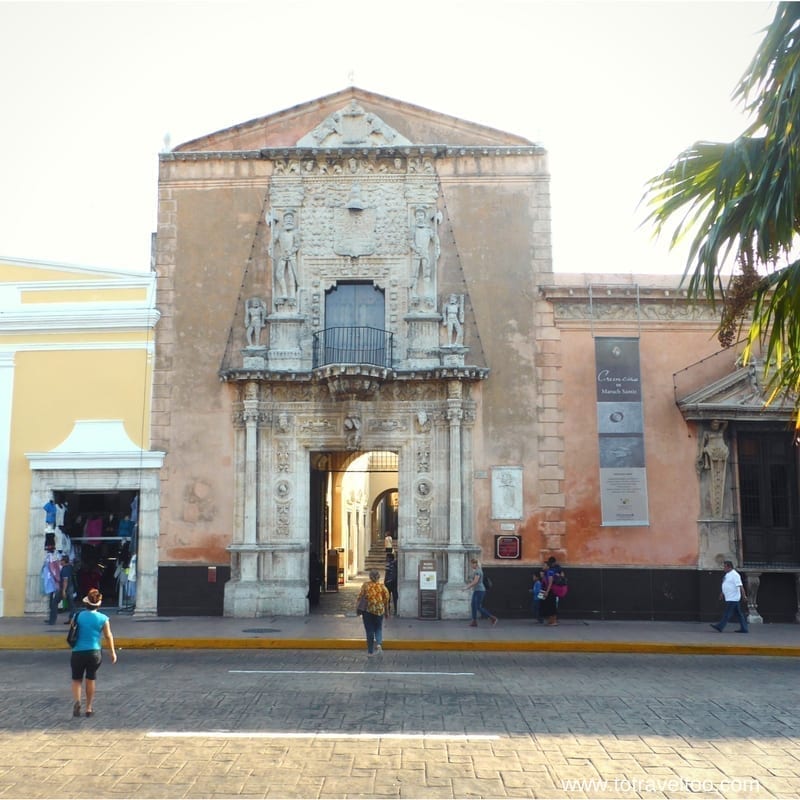 All Spanish towns and cities have a large central square or Zocalo and Merida is no different, this colonial rich city has one of the prettiest and shadiest we have seen.  Merida’s most famous building is located opposite the Zocalo.

“The jewel of the most valuable plateresque (meaning in the manner of the silversmith) art that we possess in civil architecture’) is how Casa Francisco de Montejo has been described.  The Montejo Family (also known as the Conquerors of the Yucatan) built their mansion between 1542 and 1549. 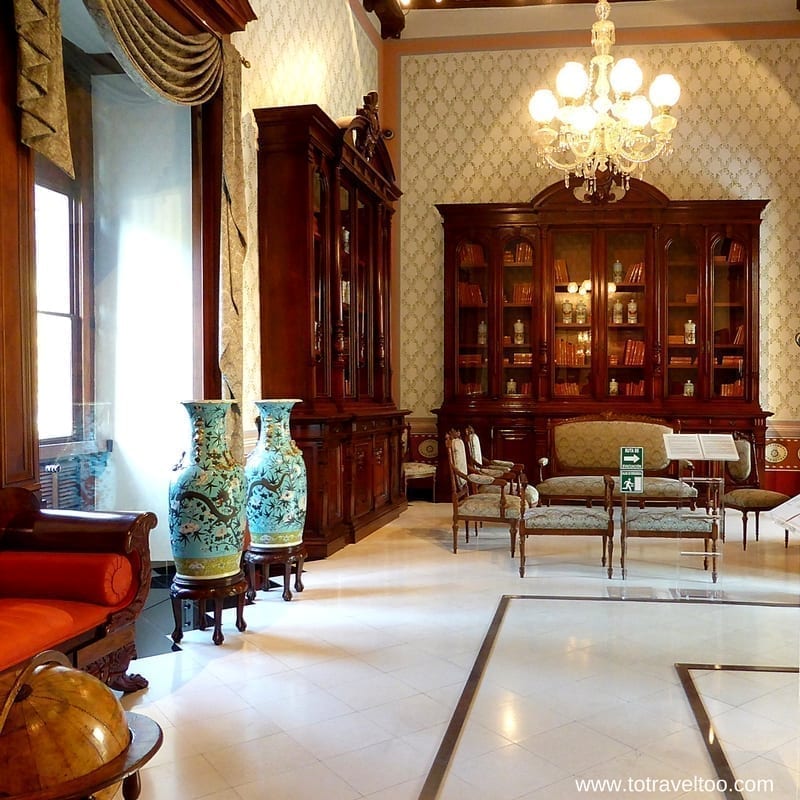 Sadly, the family ran into financial problems over many years and had to sell off some of the sectors, it originally sat on the whole block and was the only private home that faced the middle of the Zocalo. The windows were ‘neo-classical’ in design and the interior in colonial style.  It was kept in the family till 1970 when excessive local taxes started to cripple the family finances and it was sold to the National Bank of Mexico. Their plans are to run the Bank’s business in the rear of the building and preserve the front section as a Museum for all to enjoy. 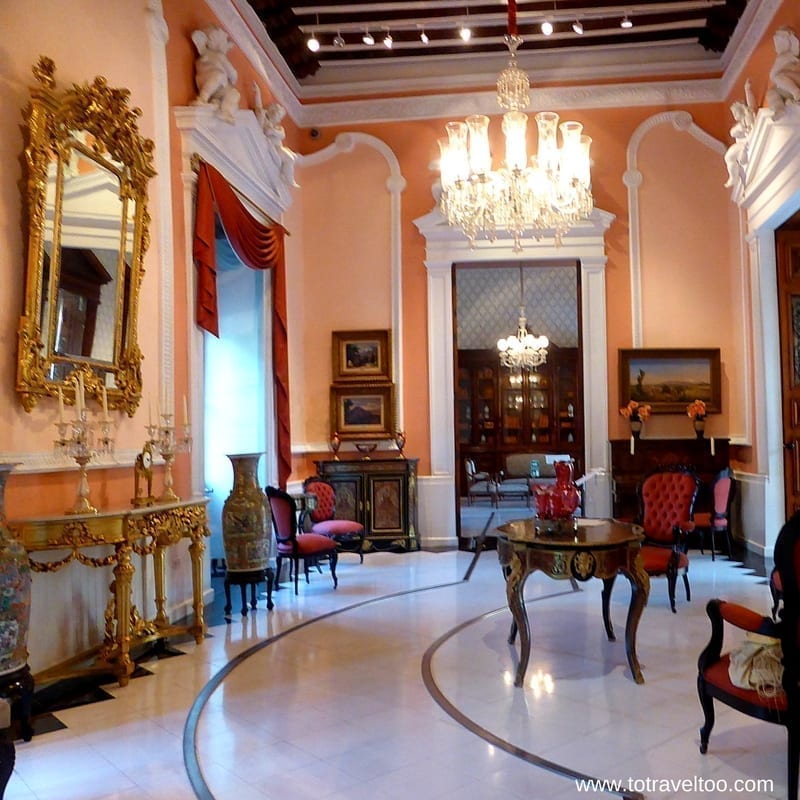 As you wander through the building you notice the high ceilings that were used for ventilation as well as the expensive antique furniture imported from Austria.  If only the walls could talk.  The lifestyle of the rich and famous over centuries, the parties that were held there, important family events and general day to day living.  The courtyard and the external corridor that winds around it invites you to sit and just ponder. 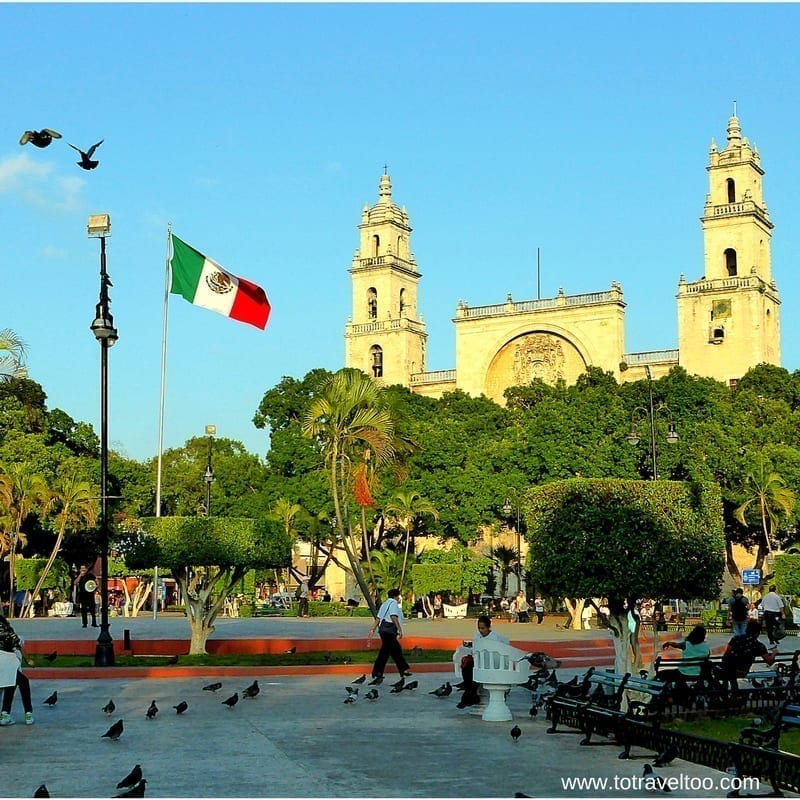 Merida’s Zocalo and the Cathedral

Merida’s cathedral built by the Franciscans back in 1561 took 30 years to build.  Stories tell of ancient Mayan pyramids torn down and stones used as building blocks and that the Cathedral was built over the Mayan town of T’ho. As Cathedrals go this one I felt was quite plain, cold and uninviting and not highly decorated as some we have visited in Mexico.

We could have stayed with Humberto for the rest of the day and night listening to his stories.  If we go back to Merida we would like to catch up with him and ask him to tell his tale of his famous discovery.

Where to Stay in Merida

What to do in Merida

Visit the Pink Flamingos in the wild at Celestun

The Yellow City of Izamal

The Pyramids of Uxmal

Our Ultimate Guide on visiting the Yucatan Peninsula

If you enjoyed our article you may want to PIN it for later: 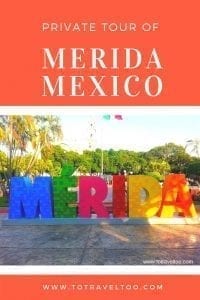 Our private tour of Merida was sponsored by Visit Mexico and Yucatan Travel.

Disclosure: Certain links in this post are affiliate links. This means that should you make a purchase via our link, we will receive a small commission which will not affect the price you pay.

Contents1 Thailand is world famous for its flavoursome cuisine.1.1 All About Our A Chef’s Tour – Chiang Mai Food Tour1.2 Stop #1 A Chef’s…